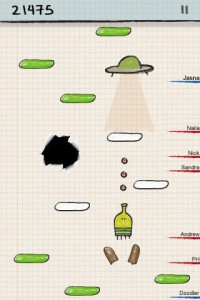 Lima Sky’s Igor and Marko Pusenjak were profiled in the New York Times today as part of this weekend’s iPad launch.

With the U.S. release of the iPad on Saturday, most developers have had no chance to test their games on the iPad prior. Only a handful of developers were given early access to the iPad, which left many developers scrambling to get iPads in hand as soon as possible. The Pusenjaks were uneasy about submitting an iPad version of Doodle Jump without first testing it on the units, especially since it heavily relies on the accelerometer. They got to work on the new version of Doodle Jump right after buying the iPad on Saturday morning in New York City.

“Plenty of people will see a nice spike in downloads today, but we’re more concerned with the long-term stability of our application,” Igor said. The brothers estimate that it could take a few days before they were satisfied with the game.