Earlier this month we had a chance to preview ZombieSmash by Gamedoctors, a castle defense game that promised to stand out from the pack by marrying the genre with another of our favorite pass-times– Zombie Killing. That concept certainly seems to have gained a lot of attention in our forums of late, and now the wait is over, as ZombieSmash [AppStore] is available!

Our time with ZombieSmash has laid to rest our doubts that the genre had wrung out all it could, as ZombieSmash not only looks gorgeous, in a cute Plants vs Zombies kind of way, but has a number of surprisingly original elements to diversify the tired castle defense gameplay too. For starters, enemies can attack from both sides of the house at once, putting to use the multi-touch features of the iPhone. Scripted level manipulation also gives the game a more tailored and refined experience, in one level for example the screen gradually zooms closer and closer on the house you are protecting, making it more difficult to respond to incoming attacks and upping the challenge. It gives a sense of purpose and individuality to each level that removes some of the monotony of seeing the same house over and over. 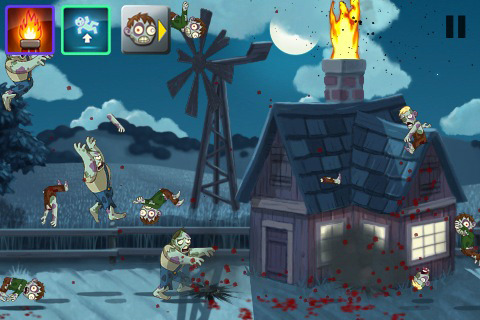 A castle defense game wouldn’t be complete without a range of monsters to defend against, and ZombieSmash delivers abundantly in this respect. New monster types are regularly introduced, each with their own attack style and different means required to dispatch them. And by means we’re talking about over 20 unique weapons and upgrades that are each controlled differently, from pull-the-pin grenades (which hilariously, you can smack the zombies around with before they explode) to screen-clearing giant boulders. Whilst there seems to be an underlying strategy to ZombieSmash in deciding where and when to use your special weapons, particularly as some weapons combine to do additional damage, as a castle defense game that incessant flicking-like-a-madman gameplay is unescapable, and is ultimately what turns people away from the genre. The developers have seemed to recognise this and address it somewhat, as a few levels focus solely on special weapons, blocking the ability to grab enemies altogether. 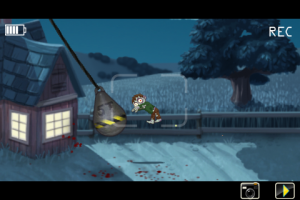 One of the high watermarks of our experience with ZombieSmash has been the “Finish Him" cam (a throwback to Mortal Kombat fatalities) where time freezes and you can bestow immeasurable pain on the last zombie of each level– all recorded in celluloid for you to seamlessly email to your friends, send to facebook or save them to your phone without leaving the game. To round out the socialisation aspects, ZombieSmash features Chillingo’s Crystal platform, offering achievements and leaderboards for a variety of the game modes on offer.

ZombieSmash has 31 Campaign levels (with the choice of either Normal or Hard mode), an Endless Siege mode and a nifty Sandbox mode, where weapons and Zombies that you’ve met in the Campaign mode can get friendly in your very own creative/sadistic ways without the risk to your house. From what we’ve seen based on our own sessions with the Sandbox, and from posts coming in from our readers, there are some rather remarkable means of eliminating Zombies that may not seem apparent at first. There is also a comprehensive upgrade system in ZombieSmash, where stars collected from the other modes can be used to boost your arsenal and defenses, enabling you to hold out and dish out all the more. You’ll need to really dig deep into the upgrade shop to face the Hard difficulty levels, as even Normal difficulty poses a substantial challenge in the mid to latter stages.

ZombieSmash has evidently received a lot of love from the developers, who have attempted to liven up the stale flicking gameplay that comes with most castle defense games. As a result, ZombieSmash really does stand head and shoulders above its competition.

Despite all this, we still aren’t convinced it’ll make converts out of those who avoid castle defense games, but may draw in those open to a different take on the genre. A rocking soundtrack by Chris Hülsbeck, of Giana Sisters fame, completes the package– a fitting encore for your hard day of Zombie culling.

If you haven’t already, be sure to check out the Debut Trailer (which we’ve included above) for a look at the gameplay. Also, check out our discussion thread, which is brimming with many positive impressions from our readers.