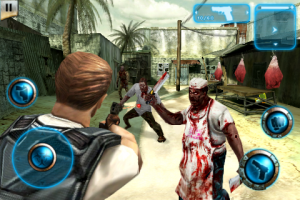 I’ve always been a huge fan of the Resident Evil series, and having likely spent weeks of combined playtime in my life playing and re-playing the games of the Resident Evil universe. It’s more than a little weird to me that Gameloft has somehow managed to make a better Resident Evil game than even Capcom, the original creators of the series, has on the iPhone.

If Gameloft’s highly “inspired" games make your eyes roll, you should turn back now because when I first saw Zombie Infection today there was little I could do to stop myself from groaning at the first level we were shown– A nearly identical African cityscape to the one found in Resident Evil 5, with an equally similar premise to the game complete with a second character you come across named Shawna who serves as your female sidekick.

Zombie Infection comes loaded with 10 levels, some lifted directly out of Resident Evil games, and others in locations that could either be described as “ridiculous", “awesome", or possibly even “ridiculously awesome". One such locale we were shown was a zoo, filled with zombie zoo animals. After just barely making it out alive after fighting a zombified lion, my play session was brought to an end by some gigantic crocodile that sprung up from the water. 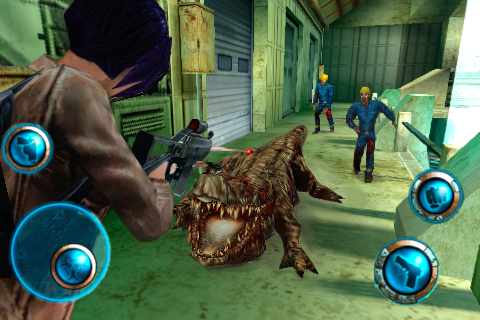 Like other similar Gameloft games, controls work exactly how you would expect. A virtual joystick handles all your movement, while context sensitive buttons appear that do things like open doors, shoot, holster your gun, unleash melee attacks, etc. Speaking of melee attacks, there’s also a number of “finisher" moves that you can pull on nearby zombies. For instance, if a zombie is knocked to the ground you can run over to them and a button will activate allowing you to stomp their head. Also, like Resident Evil games, you cannot move and shoot at the same time.

I wasn’t able to get a solid answer on the graphics engine powering Zombie Infection, but the polygon count of the character models, scenery, and all the texturing was extremely detailed. On top of that, it was running at an excellent framerate, making the whole package that much more impressive.

Aside from the standard campaign mode, there’s also going to be a survival mode Gameloft is calling “Arena Mode" where players fight off endless swarms of zombies. Other details are scarce at the moment, and much like Tom Clancy’s Splinter Cell we only had enough time with the game to blow through a few levels. Needless to say, I’ll be giving Zombie Infection a thorough play through as soon as its released sometime later this month.