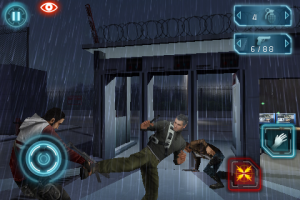 The first game that Gameloft showed us at GDC this year was the latest in a long line of Splinter Cell games, a series that also has several books associated with it along with a movie that may or may not still be in the works. In the games, you play as Sam Fisher who is an extremely experienced member of an elite team within the NSA called the “Third Echelon". Splinter Cell games are episodic in nature, and this is the sixth installment in Sam’s adventure.

Tom Clancy’s Splinter Cell Conviction for the iPhone closely follows the console game with the same title. In fact, they are so alike, they even share cut scenes and voice work. (And because of this the voice acting is much higher quality than typical Gameloft games.) There is also a surprising amount of chatter between the bad guys you come across, and Tom Clancy’s Splinter Cell Conviction is one of the few iPhone games that frequently drops the F bomb. It will be interesting to see how much of that remains in the final version of the game. 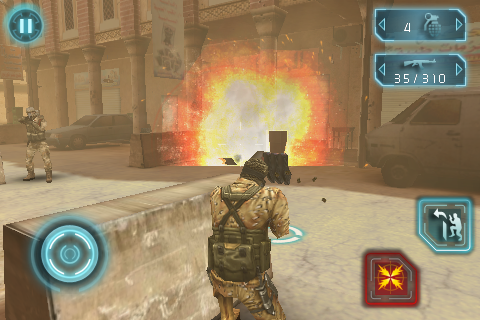 There are 10 included levels that Gameloft estimates will take players anywhere between 4 to 5 hours to burn through, and of the few levels we were able to see in the demonstration the locales vary wildly from night time stealth missions to missions in middle eastern cities complete with sand blowing everywhere. Overall the game looks amazing, and according to Gameloft is running on the next evolution of the NOVA engine. 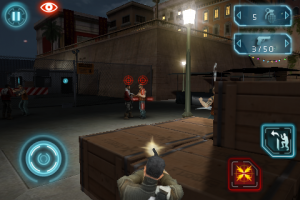 Tom Clancy’s Splinter Cell Conviction controls well, using a virtual joystick for movement, an array of context sensitive buttons that appear when needed as well as the same buttons that act like dials seen in many other Gameloft games that can be swiped to select different weapons and gadgets. There’s a cover system, different instant kill melee attacks, and a “tag and execute" aiming mode that can potentially allow players to slay entire rooms full of bad guys.

For the few minutes I was able to play of the game, it’s hard to form much of an opinion on it. Initial impressions are positive, but we’ll need to put the game through its paces once it’s finally released. Gameloft isn’t discussing release dates with Tom Clancy’s Splinter Cell Conviction yet, but the console versions of the game are due to be released on April 13th, so it’s unlikely that we will see the iPhone game before then.