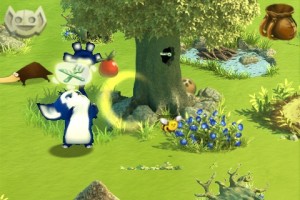 Today we met with Asbjorern Soendergaard and Morten Svendsen of new iPhone development group Tactile Entertainment. Tactile was founded a year ago to focus on iPhone games and their first project Pocket Creatures is finally nearing completion.

While we covered the game’s announcement last week, today we had time to see the game in person at GDC. After spending time with it, Pocket Creatures seems a surprisingly complex experience. Soendergaard didn’t want this to be considered just another pet game. Instead, he describes the game as an open world sandbox experience partly inspired by Black and White.

The game opens on a deserted island where you find a mysterious egg on an alter in an ancient temple. The egg hatches and you are responsible for the care of the creature. You can treat your creature with love or hate and condition it’s behavior based on positive or negative feedback. Environmental objects and creatures can be used and combined in surprisingly complex ways.

Morten Svendsen walked us through the various interactions in the game:

Rubbing on screen will give your creature love/affection while swiping across the screen will slap/hit your creature. Feed it a banana and then slap it, and it will learn to hate bananas and avoid them in the future. Various objects and tools can be combined in different ways (seeds + water + manure = growing plant). 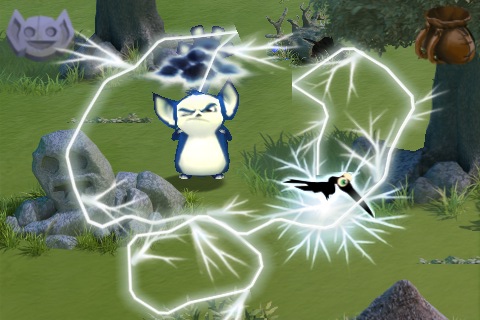 The game keeps running track of all the relationships between the creature and its environment, and the creature will act autonomously even without your interaction and will behave based on this previous conditioning. Meanwhile, different achievements unlock cosmetic add-ons, such as horns or wings, so you can customize your creature’s look.

The game remains in pre-beta so the video does not represent the final visuals, which will be further enhanced. Overall, though, I was surprised and impressed at the depth of interaction for the creature and its environment. It was definitely beyond my initial expectations of a “pet" game, so I recommend at least watching through the video to see it in action. The game is about to go into beta, and should be coming in the next month or two.