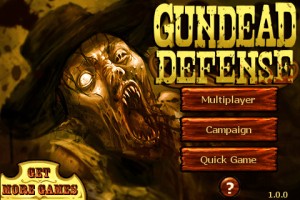 I’m really not even sure what to make of Gundead Defense [App Store]. It’s a free tower defense game set in 1885 where cowboys are battling zombies in the wild west. While the premise is beyond ridiculous, the gameplay is extremely solid and it even features some functionality I haven’t seen in other tower defense games before.

Gundead Defense follows the standard tower defense formula in that there are creeps traveling down a set path that you need to defend. Instead of placing towers, you position members of your posse armed with different kinds of weapons. You can also dispatch different henchmen down the path to fight with the creeps to supplement your defenses, which creates this interesting second layer of strategy to the game as you not only need to manage placing and upgrading members of your posse, but you also must strategically order your henchmen to attack to exploit the weaknesses of the various zombie types. 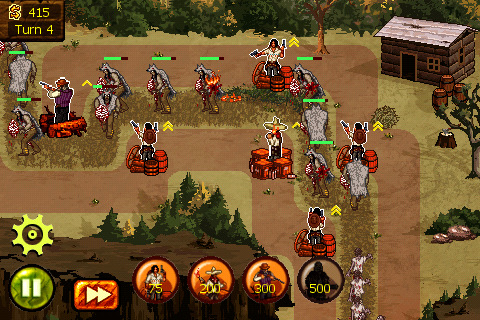 In addition, there’s also a multiplayer mode where you can either play on a single device, or with two devices via Bluetooth. When playing via Bluetooth, both players play at once on a split map and you can see where your opponent is placing towers and everything. It’s really cool, and again, I can’t believe they’re not charging for any of this.

The included single player has seven maps and features both a quick play mode and a story mode that focuses on your posse robbing a bank and being jumped by zombies. There’s also a single 99¢ DLC level pack that adds an additional seven maps and allows you to play as the zombies who have completely different abilities. Purchasing the DLC pack also will let you play as the zombies in multiplayer.

I’ve been having a great time with Gundead Defense, and highly recommend downloading it. If you somehow haven’t played a tower defense game before, this freebie is an excellent introduction to the genre.