The original Zuma by PopCap Games spawned a raft of look-a-likes of varying quality, but the recently released Sparkle [App Store] certainly appears to be amongst the best now available on the iPhone. Created by the developers of Azkend and Dragon Portals, two other excellent action puzzlers, Sparkle is gorgeously presented in every way.

For anyone new to the concept (frankly, you’ve been living under a rock), Sparkle is essentially a Match-3 game spread out over a track, where a long string of various colored balls slowly moves to the end of the path. You fire randomly colored balls at the string in an attempt to make groups of three or more like-colors, causing them to disappear from the playing field. If the string reaches the end of the path, it’s game over. 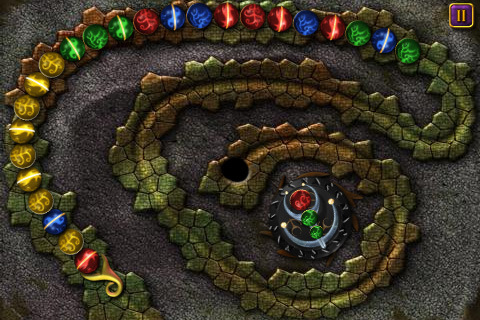 Along the way you’ll collect a number of power-ups and items to help your cause, and be introduced to a chain-reaction combo system to really rack up the points. There are three game modes in Sparkle which are gradually unlocked and help to deviate its offering, including a story-driven Quest mode, a time-attack Challenge Mode, and a score-tracking Survival mode. Sparkle also keeps track of your progress through an achievement and stat system, though no global leader boards are available at present.

Sparkle is great if only to rekindle some of that Zuma nostalgia right in the palm of your hand. As we’re often finding, the tried and true gameplay works surprisingly well on a touch device, making Sparkle one highly polished and easily recommended action puzzler.