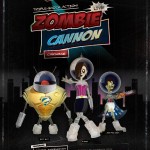 H.grenade, developers of circuit_strike.one [99¢], apparently have switched teams from Chillingo to Freeverse who just so happen to be collaborating on their upcoming game, Zombie Cannon Carnage— A delightfully ridiculous game with an even more ridiculous premise.

In Zombie Cannon Carnage, zombies from outer-space have crash landed on Earth. Instead of sticking around to endlessly munch on succulent Earthling brains, they decided to build a makeshift cannon from spare circus parts to fire themselves back in to space. With semi-randomized gameplay, various purchasable power-ups, all kinds of obstacles to run in to, and tons of explosions, Zombie Cannon Carnage is one of the better (and substantially more hectic) cannon firing games I’ve played recently.

Gameplay is similar to other cannon firing games in that you aim your cannon, fire, and see how much stuff you can hit. Each zombie is equipped with a jet pack that has a limited amount of fuel which is capable of sending you flying forward for a brief period of time. When you finally crash in to the ground, you can self destruct for even more points.

Bonus points are awarded for doing crazy things like taking down helicopters, crashing in to ice cream trucks, and other things I haven’t discovered yet. The game does seem to have a sizable learning curve to it, as there’s a delicate balance between shooting your zombie high enough to fly far, but if you soar too high you’ll get shot down by the fighter jets patrolling the cityscape.

Here’s a video of me doing poorly:

Zombie Cannon Carnage is scheduled for release on February 23rd, and is really worth checking out if you’ve enjoyed playing other cannon shooting games on the iPhone. Like all Freeverse games these days, Zombie Cannon Carnage comes loaded with full Plus+ support including online leaderboards which I’m sure will be absolutely dominated with scores I will never be able to beat shortly after the game is launched.