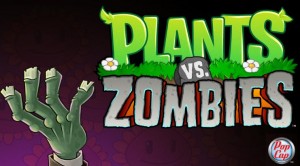 When Plants vs. Zombies [App Store] was originally announced on April 1st last year, PC gamers everywhere (myself included) were unsure if Popcap’s newly revealed game was part of an elaborate April Fool’s Day hoax or not. A little more than a month later, the game was released and not only saw universal acclaim from the gaming media resulting in an 88 on Metacritic, but also earned the title of Popcap’s fastest selling game of all time.

In Plants vs. Zombies, Popcap takes the standard tower defense formula and greatly simplifies it. Instead of a path to build towers along, you drop seeds in your yard which then grow in to plants that have various offensive or defensive capabilities. The yard is organized in a grid, and zombies move straight across the row they spawn on, munching (or in some cases jumping or flying over) anything that they come in contact with. 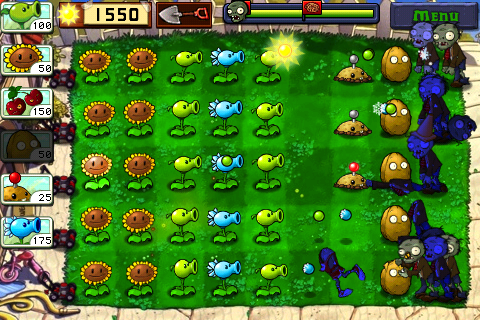 A gauge on the top of the screen shows how close you are to the end of the level, with flags indicating when big waves of zombies are going to come. When you clear a stage, you’re often awarded with the seeds of one more of the nearly 50 included plants. This seemingly constant progression does a great job of keeping you interested, as it always seems like you have a new toy to play with. To shake things up even more, mini game levels are mixed in, including a bowling game of sorts, a whack-a-mole game with zombies, and others.

Originally designed to be played with a mouse, Popcap did an excellent job of porting Plants vs. Zombies to the iPhone. The resource required to build your defenses is sunlight, and in the PC version feverishly moving your mouse around to click on the small suns falling from the top of the screen got tiring (especially when playing on a laptop with a touchpad). On the iPhone, the sunlight mechanic is also in place, but seems to work so much better when you only have to tap the falling suns to collect them. 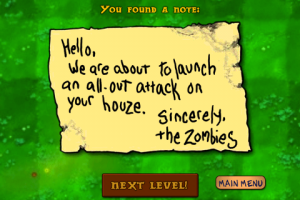 Interface elements have been made smaller to dedicate more screen space to your yard, and some things have been moved around. Your available seeds have been moved from the top of the screen to the left, and to plant one all you need to do is tap it then tap the grid square of your lawn where you want it placed. Alternatively, you can tap the seed icon then drag your finger around your lawn. This causes both the X and Y axis of the square you’re currently selecting to light up which effectively put an end to me accidentally placing seeds in squares I didn’t mean to.

Plants vs. Zombies is absolutely loaded with high quality animations, excellent cartoonish zombies, and silly dialog between your neighbor/shopkeeper Crazy Dave and even notes from the zombies themselves. Throughout the game you’ll defend your front lawn during the day, at night, then defend your back yard which introduces water plants that can only be planted in your pool.

As you advance through levels you will come across many more zombies than just the standard run of the mill mindless brain-muncher. There’s a Michael Jackson zombie that causes others to rise from gravestones following a Thriller-like dance. There’s also zombies that have armored themselves with screen doors, traffic cones, buckets, football pads, and other equally ridiculous equipment. 25 different zombies in all are included, and one end-boss. Each zombie even has their own profile inside the in-game almanac, and they’re really worth a look once you unlock it.

Plants vs. Zombies performs well on both my iPhone 3G and 3GS. I did experience some slowdown when there were tons of zombies and projectiles on screen, but overall this didn’t cause a problem playing through the game as the only time there was enough things happening on-screen to cause slowdown was at the very end of some levels where you already have your yard fully covered and are just waiting for the last wave of zombies to die.

On the iPhone, Plants vs. Zombies only includes the main story and a quick play mode that is unlocked once you’ve beaten the game that will allow you to play a few different scenarios and the various mini games you came across in story mode. The endless survival mode from the PC version is nowhere to be found, which is very disappointing, especially since I imagine quite a few people excited about Popcap porting the game to the iPhone have already completed the story mode on the PC. 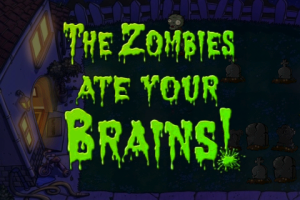 The 88 Metacritic score of the original Plants vs. Zombies (complete with 100’s from multiple sources) just goes to show how great this game is. The iPhone port is absolutely phenomenal, and even though it’s lacking a few game modes, there’s always hope for them to be implemented in the future either via an update or a DLC add-on. There isn’t a lite version, but there is a free Flash demo that I highly recommend trying if this is the first you’ve heard of Plants vs. Zombies.