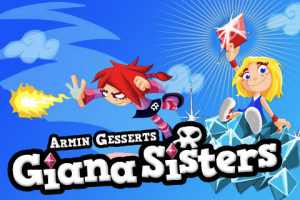 For those whose fondest memories of growing up in the 80s and 90s involve playing through the various iterations of Super Mario Bros, platforming never seemed sweeter. For a handheld device especially, that never looked like changing– the 80s spark that created the Mario fever isn’t easily replicated and Nintendo will never share its magic. It is fortunate then that the 80s also saw the birth of an infamous title known as The Great Giana Sisters, a title that attempted to challenge Nintendo’s platforming dominance.

Now on the iPhone after a re-imagination on the DS in 2009, Giana Sisters [App Store] is an enhanced version of a tongue-in-cheek attempt in 1987. The levels have everything you would expect of a Mario-inspired game– refined run-and-jump platforming, fireball power-ups, brick smashing, coin collecting and even castles with Bowser at the end (well, a look-a-like cousin at least). In fact, it is not until well into the second world that Giana Sisters even hints at an identity of its own. 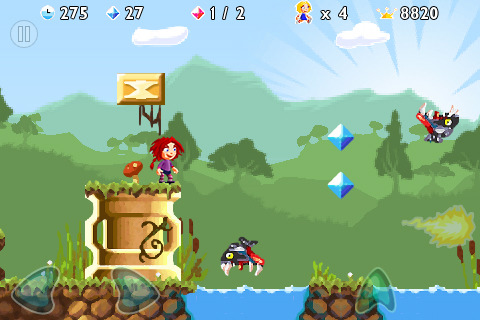 By the third and fourth worlds however, an attitude easily rivalling that of their plumber pals shines through. And the sisters will need every bit it as the game is rife with pitfalls and dangers. Crumbling platforms, deadly waters and razor sharp stalagnites– as well as a battalion of terrifically crafted enemies, some of whom would as soon run you down as fire a bazooka at you– are all thrown at our heroines. Not all enemies can be defeated by fireballs and head-stomps either, often needing deft and precarious jumping to avoid. The sisters do have a little help though; dispensers spit out shakeable soda bottles to clear brick obstacles or put out fires and dispense man-sized, floating bubble gum balloons to fly around in. A handy flower pot check-point is also available in most levels to save your progress.

The original title featured 32 levels all up, which are all playable after completing the game, but it’s the whopping 80 newly crafted levels that will keep you most occupied in Giana Sisters. Negotiating your way through these levels is a breeze, with both a Classic and Touch scheme available. The Classic mode works a treat and is the recommended setting, the finely-tuned left and right movement and jump and attack buttons are well-placed on the screen. As in our early impressions though we had difficulty getting used to the Touch scheme, particularly the jumping mechanic which proved too tedious. Both settings have a swipe feature for looking below or above your current platform. 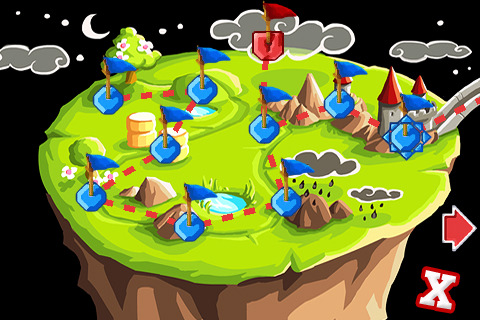 The production values in Giana Sisters go beyond just a carefully crafted platform game however, as it both looks and sounds superb. The artwork is crisp and detailed with gorgeous, layered backdrops and themed levels really setting the scene to distinguish each area. The soundtrack is really something to write home about too; layering on that nostalgia thick with keyboard-heavy midi-esque tracks that run the gamut of upbeat to dark and ominous.

Giana Sisters is certainly deserving of its tremendous cult following. As a widely appealing game, it is easily recommended to all as a fresh take on classic platforming. It draws its strength from its unashamed inspiration, offering a tight, fully-featured and excellently crafted platformer that really raises the bar for the AppStore. Achievement hunters and competitive types will also be glad to know that Giana Sisters comes packaged with OpenFeint support for both achievements and leaderboards.

Impressions from our discussion forums have been wildly positive. Be sure to check out the developer’s trailer above for a closer look.