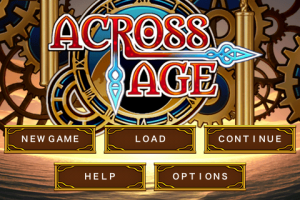 Action RPGs on the App Store have been steadily improving with the release of each new game. The first, The Chronicles of Inotia, was received with mixed feelings. Later, Zenonia was greeted as a vast improvement (albeit with its own flaws) and most recently Inotia 2 stole the crown upon its release last November. Now FDG Entertainment has upped the ante once again with Across Age [App Store], an RPG that explores time travel and simultaneous management of multiple characters.

The story of Across Age is standard fare for the genre, falling cleanly into a long line of RPGs in which the goal is to save the world from an evil magician. Unlike certain other similar games on the App Store, however, the writing and translation is extremely well done, with no noticeable spelling or grammatical gaffes. These high quality production values show in the soundtrack and crisp art style as well; each environment is colorful and carries its own unique and catchy background music. 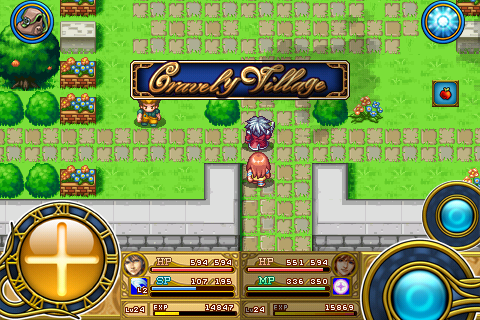 Across Age‘s big hook is that players control two separate characters at once, switching between them and separating them at will by touching on their icons located at the bottom of the screen. The male character, a knight named Ales, can pick up the female mage character, Ceska, and throw her to otherwise unreachable areas. This creates opportunities for fun puzzles that might require Ceska to reach a switch to open a door for Ales, or simply lead to hidden treasure.

The character separation and cooperation element works quite well to create good puzzle variation. One puzzle might require Ales to separate and engage in a simple block pushing minigame, while others could turn into a complex maze that requires the two characters to separate and help each other progress. New mechanics (like a “boat" that can be used to navigate watery environments) are introduced at a fairly consistent rate throughout the game, effectively preventing things from becoming boring and repetitive. 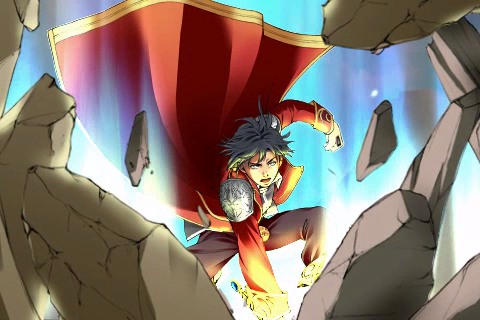 Across Age‘s other big gameplay gimmick is the ability for Ceska to time travel through the use of sparsely-located panels. This opens up plenty of possibilities, and often forces players to think creatively. In one instance, Ceska has to go back in time to drop off a wine bottle, only to return years in the future to harvest the now priceless aged wine. Special items called rebirth stones can be left along with a normal item in a magic pool located in the game’s central city and returned to in the future to create special items and weapons. This system can often add special attributes to weapons and other items, and experimentation is encouraged to discover the best possible results.

Combat in Across Age might take a while to get fully acquainted with, but it works quite well after a bit of practice. Ales attacks by running directly into enemies (which looks quite stupid at first but makes sense if you think about it; why do you need hit a button to do something that can be done automatically?) and Ceska attacks with a variety of spells, usually long range attacks. Her spells can be cast by tapping the big button in the bottom right, and the game is pretty forgiving with the hit area around attacks to make up for the game’s rather limiting eight-way directional movement scheme. 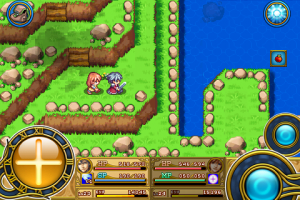 Boss battles might be one of the best parts of Across Age. Unlike many RPGs, which simply force players to mindlessly attack boss characters until they die, this game demands a sound strategy to earn a victory. In one instance I was faced with a giant plant monster which had to first be weakened with Ceska’s recently learned fireball attack before Ales could rush in to attack in its weakened state.

Across Age does have its fair share of problems, most of which probably can’t be fixed in a simple update. The equipment screen takes a fair bit of getting used to due to the small text size that makes it rather unresponsive to touch, and the game’s zoomed-in camera makes some enemies lurking in the southern regions of the screen difficult to detect before running directly into them. The most glaring flaw rears its head early in the game: some areas must be revisited far too many times to progress through the story.

The lack of multiplayer might be berated by some, but since only one character can attack at once as according to the intentional design of the game, I don’t think of it as a missing feature. A great combination of fun combat and good puzzle variation allows Across Age to swiftly avoid the problems that many RPGs run into, and its high production values only serve to increase the already substantial attractive nature of the game for fans of the genre. Zenonia 2 has a lot to prove if it’s going to continue the trend of ever-increasingly great action RPGs being released on the App Store.