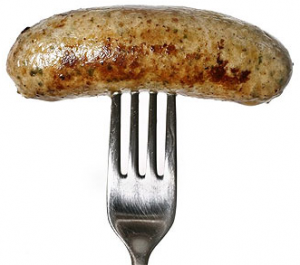 Gizmodo found an awesome video of someone in Korea playing the recently released Taiko no Tatsujin [App Store, Japan Only], a drum game which hasn’t made its way to the US or European App Stores yet. Taiko Drum Master, as its known around these parts is played with a set of thick drum sticks and a matching drum pad that plugs in to whatever console you’re playing the game on.

Naturally, the iPhone port utilizes your fingers on the touch screen, but obviously fails to provide the feel of actually using the drum sticks. Since the iPhone uses a capacitive touchscreen, you can’t just use any old drum stick to beat on the screen as you need something electrically conductive. (Which is why your finger works, but a typical stylus doesn’t.) Thankfully, it would seem cased meat products are the perfect replacement for Taiko drum sticks:

I had joked with friends who were complaining about the lack of a stylus with the iPad that they could just use a hot dog. At no point did I really think someone would actually decide to use cased meat to beat on the screen of their iPhone. Perhaps the hot dog stylus will be more popular than I originally thought.