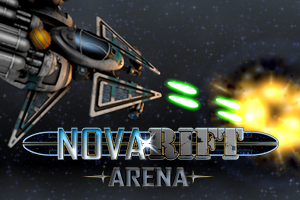 Monster Gila, creators of Ignite [$1.99 / Free], recently sent us an early preview build of their upcoming space shooter, NovaRift Arena. Right now the state of the game seems like little more than a framework for something that could really turn in to a cool multiplayer game built around a physics engine that takes in to account the different functions of your ship’s components and as you take damage your ship will perform and handle differently.

For instance, lose a thruster in the heat of battle and you’re going to have problems steering. If one of your gun takes too much damage, you’ll have to hope some of your other offensive abilities are still intact. Included in game are four different types of ships to choose from, each of which both perform differently and come with different weapon load outs. In the build of the game I’ve been playing, online multiplayer doesn’t seem to be working yet, but the local arcade mode is a lot of fun, especially as you get to the more difficult waves of enemy drones.

On its initial release, NovaRift is said to include an online deathmatch mode where players will face off in a timed deathmatch to see who can get the most kills. In the future, Monster Gila plans on maintaining the game through content updates, adding team deathmatch modes and additional ships. Designed to be easily expandable, new players are said to be able to expect “a lot of new content" after the game’s release.

The developers plan on launching the game with two different versions, a free one where players can play for 30 minutes online or try out most or all of the single player arcade levels as well as a paid version that offers unlimited online play. NovaRift is still in development, but I can see a lot of potential for a great online multiplayer game if the community picks up following the game’s release.