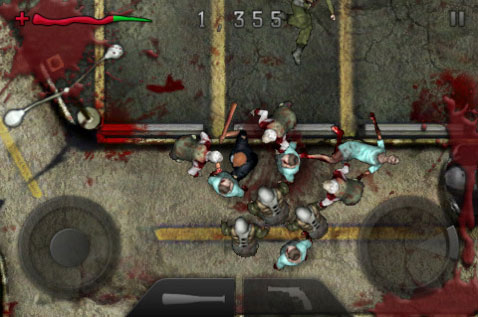 Horror movie based game Dawn of the Dead finally arrived in the App Store this evening after a brief premature release a few days ago. The game is based on the 1978/2004 horror film and gives you the opportunity to try to survive the zombie onslaught.

The game offers both Story mode and Challenge modes while playing with one of three different characters: Salesman, Police Officer, and Nurse. Each character has different Speed, Attack, and Shooting attributes to try to give you some variety in different play throughs. The Story mode and Challenge modes have multiple difficulties, but total gameplay time is not very long. You can easily finish the game’s story mode on easy in one session, which then unlocks the hard mode. Story mode consists of 5 different levels of varying goals. While these goals include some mild variety over the standard survival tasks of similar games, they are still ultimately pretty shallow. Goals include killing all zombies in an area, surviving a certain time limit, and finding an exit.

Challenge mode adds a few more individual goals (kill x zombies, survival a time limit etc…) that you can play over again to try to best your previous high score. The game offers both melee and range weapons to battle the zombies, and are demonstrated in the following video:

Controls include the typical left/right dual stick controls for movement and shooting, but the shooting control had some consistency issues resulting in moments of frustration when you’d turn around unintentionally.

Ultimately, for such a short game, the replay value relies on how much fun you had playing the first time through, but given some twitchy controls and slowly paced gameplay, we didn’t see much reason to go back. Aside from the movie tie-in, there isn’t much to make the game stand out.