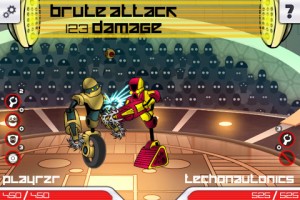 Lately, it’s become quite popular amongst App Store developers to do ports of web-based flash games for the iPhone, and Chrome Wars Arena [App Store], playable here on Kongregate, is a continuation of that trend. Chrome Wars, which is described by developers Jaludo Group B.V. as a turn-based fighting game, has deep roots in the RPG genre. Its biggest appeal lies in its upgrade/level up system that allows players to improve and customize their bots as they battle their way through the 50 challengers in the “Chrome Wars Tournament."

After creating a custom bot, players will be begin a path that will take them through six arenas to battle their way (one enemy at a time) to the top. Each victory will earn your robot money and five skill points to spend on increasing total health, attack power, speed, etc. Losing a fight will provide a player with a bit of cash as well, so if players get stuck in a rut, they can always use that spare cash to buy any number of upgraded parts from the well-stocked in-game shop to tilt the odds in their favor. 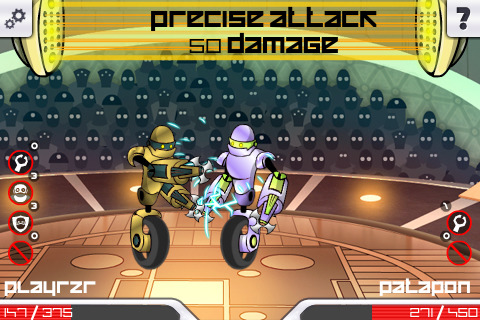 One word of warning that I should probably give to those interested in the game is that you’ll definitely need a comprehensive strategy when distributing those skill points. I spent many of the initial 20 points that come with new robots on upgrading my speed stat, and that really came back to bite me in the butt later when I had barely upgraded my health (called “grit" in the upgrade menu) or power. My robot’s attacks were lightning fast but packed about as much punch as my grandma’s left hook, so I wasn’t very successful in most fights. 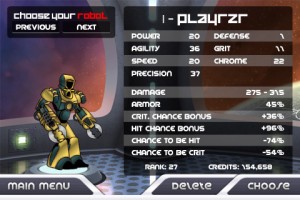 When not working their way through the 50 baddies in the arena mode of Chrome Wars, players can take the fight online against random opponents. It’s best to fully complete the game’s arena mode first (thereby getting all the upgrades you can) if you’d like to have any chance of success online, but it’s also possible to play against people you know, if that tickles your fancy.

Fights in Chrome Wars Arena work pretty much exactly like they do in the flash version (albeit with some UI modifications so the game fits the device better), so if you’d like to check out the game for yourself, try it on Kongregate.com first. Slower-paced RPGs like Chrome Wars Arena aren’t for everyone, but plenty of people (myself included) can appreciate some good old fashioned turn-based battles, so you don’t have anything to lose by at least giving the game a shot and trying out that free flash version.