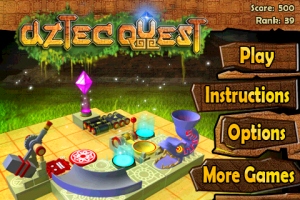 Aztec Quest [App Store] by Clickgamer is in a unique, 3D puzzle game. The game can be best described as an isometric ball-drop game, but what at first seems to be a simple puzzle game becomes interesting and complex when players discover the intricacies of its full-blown physics engine. Aztec Quest is one of those rare, unique entries into the puzzle genre that could potentially be addictive for everyone who tries it.

At the beginning of each level, Aztec Quest hands players a number of different types of pieces or simple machines which will be used in order to get a small ball from the dragonhead (the origin point for the ball) to the diamond (your target in each level). These pieces are to be dragged with a finger to an open slot on the game board from the bank at the bottom of the screen. This may sound easy, but the game has a specific way in mind for these challenges to be completed, so pieces can only be placed on highlighted parts of the game board. 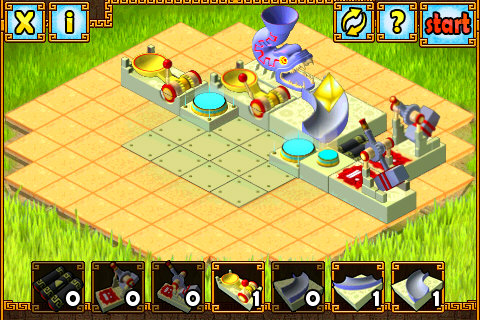 Players usually only have access to five unique types of pieces per level (the rollers, spring pad, tube, hammer, and catapult) but several of these pieces come in four different flavors that changes the direction they move the ball in; e.g. there are separate catapults that launch the ball up, down, left, or right. There are also warp pads in later levels, and the way that these pads function will force players to use critical thinking to succeed.

There are a full 50 preloaded levels in Aztec Quest, but the real headliners here are the community features. The game allows players access to a complete level creator that gives them the freedom to do pretty much anything they’d like in-game, and created levels can be uploaded to an online database for the game. Alternatively, any level that an player creates can be downloaded for free, giving Aztec Quest potentially unlimited replayability. 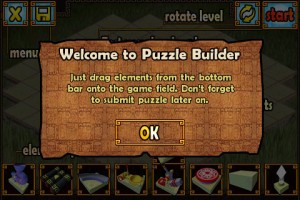 During my time with the Aztec Quest I found that it was always a lot of fun to figure out a way to beat the levels in a way that the developers never intended. What would have otherwise been a complex, brain-bending challenge can sometimes be solved with only a few pieces through a little ingenious use of the physics system to bounce the ball into places that it normally shouldn’t go.

To showcase this type of level manipulation, I uploaded my own level to the Aztec Quest servers. Search for “Toucharcade Rigney Challenge" and try to beat my level. There is one part of that level in particular that will require you to use a piece in a way that you wouldn’t normally. PM me (I’m RKRigney in the forums) if you successfully complete the level and send me a picture of the way that you went about doing it. I don’t have any prizes to give out, but I will bestow upon you “mad street cred."

Completing any downloaded player-created level will earn a player points. These points don’t really have a practical application in Aztec Quest, but the game does calculate your worldwide rank based on these points, so those who wish to rise to the top can keep easy tabs on their progress. As of the time of this writing the current #1 spot is held by “Lbhb," who has 161,550 points, so to anybody who wants to knock that guy from his throne, I wish you great luck.

There’s something oddly satisfying and fun about solving the puzzles, and figuring out creative, unusual ways to do them is especially fun. The online and community features are especially well fleshed-out, and the only real thing that I feel like is missing would be the ability to save online levels to the device for later play, but the developers have said in our forum’s official thread for the game that they are considering adding this feature as well in a future update.

Those who like some good, challenging, pick-up-and-play gameplay will likely find something to love in this game, and I can’t wait to see what creative types come up with via the online level creator. There is a lite version available on the app store, so no one should miss out on Aztec Quest completely.