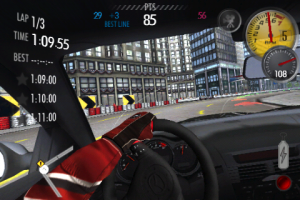 If you’re a fan of racing games, and were holding back on picking up EA’s recently released Need For Speed: Shift [App Store] for some kind of sale, now is your chance. The price was dropped from $9.99 to $6.99 yesterday, and since then Shift has been rocketing up the iTunes charts.

If this is the first you’ve heard of this game, we got a great deal of hands-on time before its release and posted an in-depth preview. Shift departs from the Need For Speed arcade style gameplay which has become standard over the years to include more simulation elements including the ability to customize cars in many different ways, buy new ones, and the game even constantly tracks your performance to determine what kind of driver you are– Aggressive or precise.

There’s a lot to like about Need For Speed: Shift and we think it can easily hang with the best racing games on the platform. Shift sports licensed cars and music, great graphics, and a great control system with settings that make the game approachable for casual players as well as technical enough for hardcore players.

If you’ve enjoyed racing games on the iPhone, this isn’t one you will want to pass up… And if you haven’t yet played a racing game on the platform, Need For Speed: Shift is a great starting point.