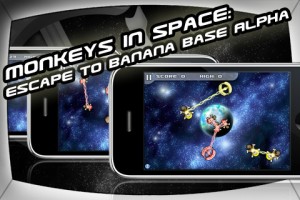 Streaming Colour’s latest game, Monkeys in Space: Escape to Banana Base Alpha [App Store] is the end result of developer Owen Goss’s series of nine video blogs that covered everything from early prototyping to the game’s release– And are totally worth watching if you’re an aspiring iPhone developer or are just interested in a look behind the scenes of indie game development.

Your task in Monkeys in Space is to direct colored monkeys to a space station of the matching color. To accomplish this goal, you draw on the screen to create what looks like a tractor beam to pull the monkeys to safety. For additional points, monkeys of the same color can be chained together using similar drawing gestures before finally sending them off to their respective space station. The game is over when two monkeys that aren’t part of the same chain collide. 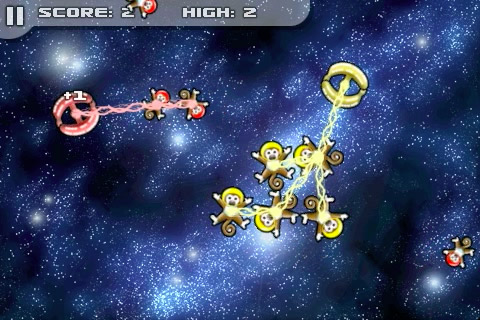 3 maps are included, which are slowly unlocked as you rescue enough monkeys and the game saves exactly where you were when you quit or are interrupted– A feature which should be far more common than it actually is. If like many of our forum members you have an unnatural obsession with OpenFeint-enabled games, you will be happy to know that Monkeys in Space features both online leaderboards and a set of achievements to pad your OpenFeint score.

Monkeys in Space has gained a considerable fan following on our forums, and while the contest is over now, Owen even had people creating fan art for the game:

There’s no doubt that the chaos management genre is quickly becoming just as packed as the match 3 section of the app store, but the gameplay in Monkeys in Space manages to be different enough from the Harbor Master and Flight Control standards that it feels fresh. As you progress in the game and get more comfortable with the chaining mechanics it seems like you get even more brazen with how many monkeys you will chain at once– Usually resulting in a rogue monkey crashing into your massive 8 monkey chain you’re working on.

If you’re crazy about these kind of games, Monkeys in Space is a worthy addition to your collection. If you’ve enjoyed docking boats, landing planes, steering Santa’s sleigh, commanding soldiers around, and all the other things you do in these games… Why not help some monkeys get back to their space station?