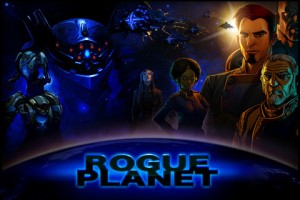 Turn-based strategy games have popped up here and there in the App Store, but none have really gained the traction that games like Advance Wars or Final Fantasy Tactics have on other consoles. With the exception of a small but devoted UniWar following, the iPhone has yet to see a breakthrough success in the world of turn-based battalions. Rogue Planet is looking to change all that.

Returning from a 35 year mission in space, the Nimeh is loaded with crew longing to see home. But when they return to earth they discover a horrible situation – the machines have taken over! Yes, that’s right – Rogue Planet is Macross Saga meets Terminator. As any science fiction fanboy will attest, the combination of these two scratches a certain nerd itch that we didn’t even know we had and we’re all the better for it.

Despite drawing from some obvious inspiration, the story in Rogue Planet ends up feeling wholly original and fairly well told. Each mission is a part of the larger story, unfolding as the Nimeh travels in search of any human survivors. Decent writing and a compelling plot keep things moving along nicely throughout. But what is a compelling story without some equally compelling gameplay? 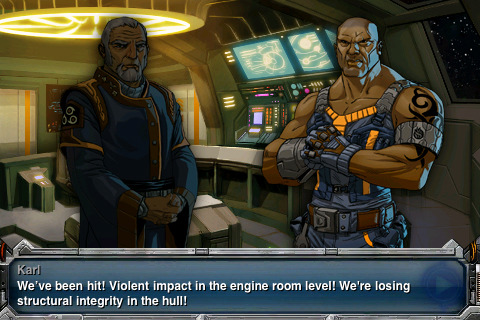 Thankfully Rogue Planet delivers where it counts. Basic mechanics feel like a stripped down version of what Advance Wars offers. You’ll move, attack, and produce units. In terms of actual gameplay, that’s the bulk of what you’ll need to know. The touch screen interface feels like a perfect fit for the genre. You just tap a unit, tap where you want to go, and confirm your intentions. Depending on your situation you’ll attack, rest, heal, bomb, or commit suicide. It’s important that you know what you want to do, because unlike many of its competitors Rogue Planet doesn’t offer an undo button. The game is fairly unforgiving in this way, forcing you to think your strategies through before jumping into action.

Chances are you just read the word “suicide” and wondered why on earth you’d want to kill one of your own men. When we first fiddled around with suicide it seemed to do little more than explode your soldier or vehicle for no real reason. As you get deeper into the game though, you learn the true power of the suicide bomber. Imagine this – your poor lonely soldier is down to 10 health. He’s useless – he can’t pick a fight and the next time someone picks one for him it’s all going downhill fast. So you offer him up as a sacrifice to whatever gods he prays to. Click suicide, and instantly do 20 damage to all units around him. If he’s surrounded by enemy units on every side, your poor little soldier will be doing more damage now than he ever could have in life. The flipside is that your remaining soldiers on adjacent squares will take damage too. This means you’ve got to really weigh the options before sending a young man to face imminent doom. 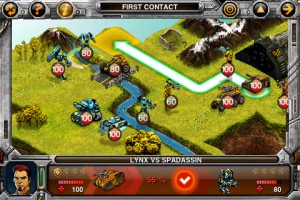 The AI in Rogue Planet is delightfully bright – sometimes frustratingly so. In one situation I had my engineer to the left of a row of tanks so that he could do any healing that was necessary. Through a fluke of bad planning one of my tanks met an untimely end. The enemy quickly swooped in with any units within reach and created a wall of units between my engineer and the remaining tanks. It was so perfect, so precise, so devious a tactic that I couldn’t imagine a simple program figuring out how to screw me like that. It was beautiful.

While the game will save your progress automatically allowing for a quick exit, the structure of the game doesn’t really take the quick and dirty nature of iPhone gaming to heart. Most missions will last more than half an hour — sometimes exceedingly so. One mission took just shy of two hours to complete. The battle of Mexico City was a long, hard fought predicament. We had to fight for every square inch of land we took and kept pressing onward to gain more ground. Nose to nose against our opponent, one wall of soldiers faced another in a bottleneck scenario that took all our resolve and determination to complete. You might think that two hours of the same mission could become dull and stale, but our experience was quite the opposite. With every turn we were on the edge of our seat, biting our nails. Every time we gained a little ground it was reason for celebration. And 36 rounds later we took Mexico City back for the human race. It was glorious – and we had barely scratched the surface of what Rogue Planet had to offer. 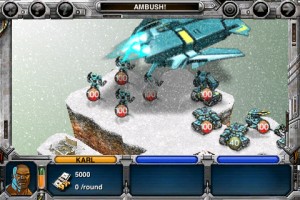 Rogue Planet could easily be the perfect template for iPhone turn-based strategy if it weren’t for a few flaws that hampered the experience. Speed was definitely an issue. Sure we loved how easy it was to capture buildings and produce units in one turn, but where was a waypoint system? Where was some factory automation? In a long drawn out battle like the aforementioned Mexico City, 70% of my time was spent making new units and moving a multitude of troops to the front. If I could have set a waypoint for new units, that would have my time in half. If I could have told my factory to produce a commando unit and a Lynx unit every turn unless I said otherwise, it would have improved my time even more so.

The lack of internet play was also a bit of a disappointment. And while internet play has been promised in the first update, there’s really no guarantee of when that update will come along. It’s a shame too, because the game was so clearly designed for multiplayer from the get-go. The game offers an additional 15 maps exclusive to multiplayer, and while you can play them in the solo “quick play” mode or locally over wireless or Bluetooth with a friend, the vast majority of iPhone gamers are going to be looking for a challenge whenever it suits their needs. That’s the whole reason online gaming is such a success – it caters to your schedule. In fact, Rogue Planet doesn’t even offer pass’n’play multiplayer.

While it’s not a perfect game, Rogue Planet is a damned good one. This is easily the best turn-based strategy experience on the iPhone so far, if not one of the best turn-based strategy games period. Rogue Planet can easily stand toe-to-toe with the likes of Advance Wars, and until now I’d have been hard pressed to find any other game that could. While the recently released Battle of Wesnoth might become a threat, various 1.0 issues currently prevent it from being a serious contender.

Fans of turn-based strategies from Military Madness to Mecho Wars owe it to themselves a treat like this. At $4.99, with the amount of game you’re getting Rogue Planet is a no-brainer.