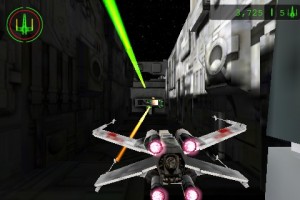 THQ Wireless released Star Wars: Trench Run tonight which offers you a chance to relive the key scenes surrounding the destruction of the Death Star by the rebel forces in the original Star Wars the movie.

Your mission: Use the Force to overthrow the evil Galactic Empire as they attempt to destroy the small rebel base on the jungle moon of Yavin 4. As part of the Rebel Allianceʼs Red Squadron, you dogfight with TIE fighters above the Death Starʼs surface before heading into a trench where you are inundated by cannon fire. Dodge obstacles and stay out of Darth Vaderʼs sights as he tries to gun you down before you have the chance to fire your proton torpedoes into the thermal exhaust port the size of a womp rat. If successful, a direct hit will cause a chain reaction that destroys the Death Star, thus saving the Rebel base from impending doom.

For anyone who has seen the movie, the plot is laid out for you: combat some Tie fighters, navigate the trench while avoiding obstacles and taking out turrets, avoid Darth Vader’s attack from behind and finally shoot your proton torpedoes into the exhaust port.

The only tie-in with the Force is the ability to slow-down time by pressing on the left side of the screen which slows the action down. Right side of the screen fires your lasers while a top left button alternates your cockpit or exterior view. The game comes with Mission and Arcade modes. Mission mode takes you through the above objectives in sequential order while Arcade focuses on two areas (Trench Run and Dogfighting) that you play over and over in increasingly difficult levels.

Overall, the game feels like a series of mediocre mini-games tied together by scenes from the original movie. While there are multiple difficulty levels, none of the individual gaming components were particularly compelling, so once we had made it through the campaign mode on easy (a 10-20 minute endeavor), we weren’t sure what there was left to do. The endless arcade mode does offer some added distraction, but quickly grows old as you realize you are just playing those same levels at increasing difficulty.

In the end, it’s not a game we see ourselves coming back to again, and given the number of other great games we’ve recently seen, we just can’t recommend it.