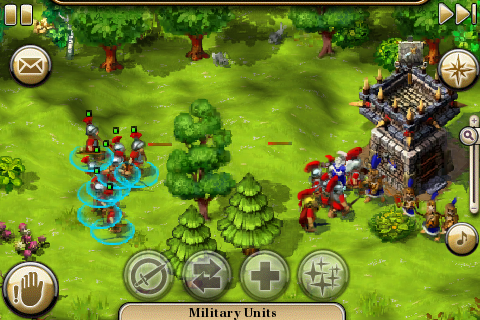 Gameloft’s iPhone adaptation of The Settlers has already appeared in the App Store. The $4.99 real time strategy simulation game started out as an Amiga game back in 1993 and has since evolved through multiple iterations.

You’ve arrived in a wondrous place populated by Romans, Vikings and Mayans competing or cooperating to reach a variety of goals. These goals include occupying land, ensuring the supply of raw materials, or simply trying to create the most beautiful settlement. There is more than one path which leads to success – you can engage in trade, forge alliances, or lead your army into battle.

Gameplay is described by Gameloft:

Early impressions are starting to trickle into the discussion thread on our forums with some positive first impressions. One forum member mrbass posted an extensive gallery of screenshots of the gameplay and tutorial screens. We’ll provide a more in depth look of the game in time.