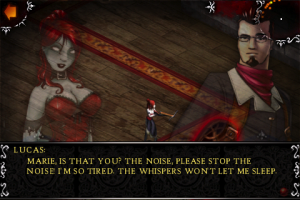 I spent a good amount of time yesterday playing through a preview copy of Namco’s upcoming shooter Garters & Ghouls. You play as the freshly reanimated Marie Dupois fighting against an evil force known as “Thrum" who has caused the dead to rise under its control. It’s your task to close the portals of the underworld that spawn the various zombies, werewolves, and demons that are rampaging across the countryside.

The game plays a lot like iDracula and other similar games, with two virtual joysticks that control your movement and shooting. Along the way you come across different weapons and powerups, and throughout the land are shops run by the “Steam Queens" where you can buy upgrades for your character’s health, movement, weapon damage, and other things. 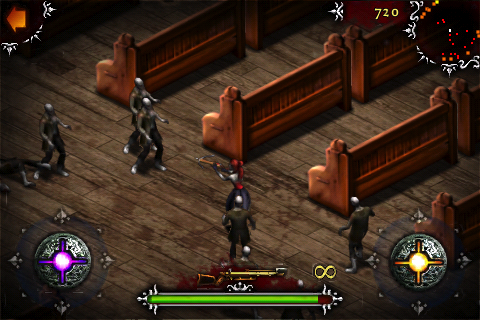 The main difference between Garters & Ghouls and similar iPhone games it that the gameplay is structured around 25 distinct and large levels and framed in a story that slowly reveals more about Marie Dupois, Thrum, and the other intricacies of the Garters & Ghouls world.

Each of these levels are laid out differently, within varied environments such as graveyards and churches. The goal of each level involves closing all of the evil minion spawning portals, and making your way to the exit. The portals can be seen on the on-screen radar, and making your way through the large maps can take some time. This is notably different than games like Alive 4 Ever and iDracula that keep you relatively contained in a very small area.

The game can get a bit monotonous at times, but the same can be said for all of the games in the same genre. Here’s a gameplay video of me playing through the fourth level and a little bit of the fifth:

Garters & Ghouls is still in development, so the video likely will not be entirely representative of the final version. In particular, your shooting directions felt a bit too discrete, though we heard that this may still change. We’ll post more information on the game as we receive it.