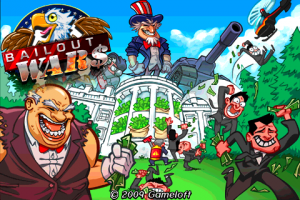 We first heard of Gameloft’s plans to produce a game targeted towards casual gamers based on topical humor back in the beginning of August, and if you somehow found yourself waiting for this game, you will be happy to find out that Bailout Wars [App Store] is now available for download.

There was a time when Bailout Wars may have been funny and relevant, but that time has long since passed, leaving a fairly decent castle defense style game with a highly questionable premise. The basic idea is you’re defending the white house from five different types of bankers all intent on stuffing their pockets full of the bailout money which is somehow bursting out of the windows of the White House.

The game is controlled the same way as other castle defense games, you defend the White House using various flicking and swiping gestures. Different bankers require different tactics, while the standard banker can simply be flicked in the air, the stock broker will open his briefcase and use it to glide to the ground. To kill them, you’ll need to slam them in to the ground with a swiping motion. 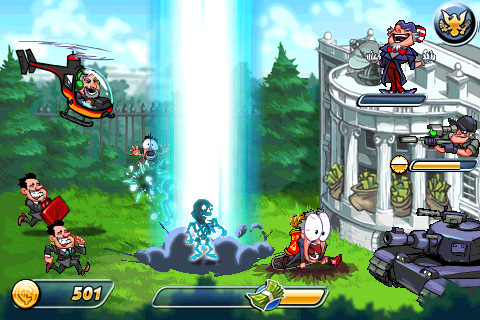 There’s a banker with a vacuum that explodes when you tap him, high risk investors in helicopters that you need to make crash, and a giant CEO that can only be damaged utilizing the White House’s weaponry and by flinging other bankers in to him.

As you progress through waves of bankers, you’ll earn coins that can be used to buy upgrades to your defenses. Three upgrades are included– The tank and sniper fire at bankers, and Uncle Sam allows for the use of some kind of touch controlled orbital laser to fry the hordes of incoming bankers.

The animations in Bailout Wars are surprisingly well done, and despite the entirely dated subject matter, the bankers themselves do have a lot of cartoon character to them with detailed animations for each action. In fact, the amount of detail in the entire game is very high, making the questionable subject matter an even more puzzling design decision.

It is interesting to see Gameloft entering the 99¢ market with this game, but with the high production value of the art and sound in the game, you really have to wonder why they didn’t pick a more universal theme. In comparison, Knights Onrush [99¢ / Free] offers similar gameplay experience for the same price, but without any attempts at stale humor or political overtones, which really is too bad because Bailout Wars is pretty fun for a castle defense game.