Action = Reaction Games has caused quite a stir in our forums with their latest release, Aves [App Store]. Openly branding it as a “tech demo," even in the iTunes description, the developers have packed some impressive features in to this game. 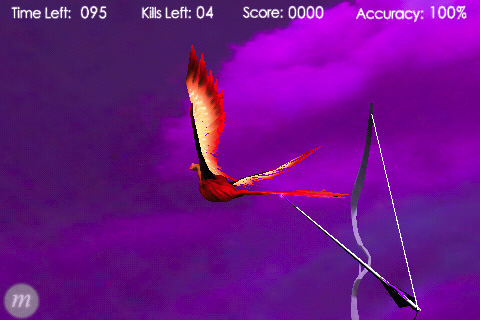 Aves uses GHOST binaural audio, which requires headphones, but creates an eerily realistic three dimensional effect to all the in-game music and sound. The animation technology in the game is called “BioReplicants," and has no preset animations for the birds flying around in the game. Instead, the physics model is built around a virtual muscular-skeleton system to create a bird rag doll that moves and flies identical to how a bird would fly in the real world.

It sounds like a whole boat load of marketing hype, but the sound is impressive and the animations are actually extremely realistic looking for an iPhone game. The actual premise of the game is far less exciting, and revolves around shooting a bow and arrow at these birds that fly around the screen. Aiming is very difficult, and beating any more than the first few levels is easier said than done. The developer is even offering $1,500 to the first person who can record a video of themselves beating level 25. (Which leads me to believe it’s impossible or close to it.)

At 99¢, Aves is worth picking up if you’ve never experienced binaural audio or want another technically impressive title to show off the power of your device. If you’re looking for anything more than a tech demo mini game, you’re better off waiting for whatever next game the developers produce utilizing this technology.