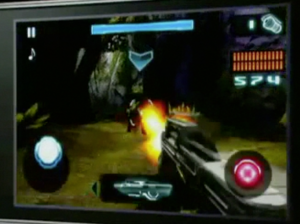 At today’s press event, Gameloft took the stage a showed up an upcoming first person shooter that is due later this year. The game has universally reminded people of Bungie’s Halo franchise and features mission based scenarios on alien worlds.

We contacted Gameloft who gave us this bullet list of features that will be coming in Nova.

Here’s the clip from today’s keynote speech showing the game in action:

The game is said to be due for this holiday season.