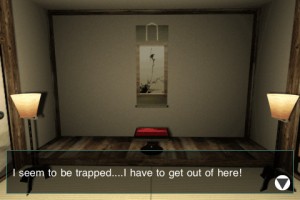 I’ve always had a fascination with the “escape the room” gaming genre because in many ways, it’s a metaphor for the many hurdles that we may face and our ability to break through them. The concept which involves a degree of logic and ingenuity has been around for more than two decades, and there are more variations than I can imagine. One that caught my attention is iEscaper! – Escape from the Ninja’s Lair [$2.99] which combines the intrigue of Japanese culture with the challenge of a solid escape room game.

While it doesn’t fall into the same genre as a Myst-type game, iEscaper! exudes that same feel with top-notch visuals which I think is quite a feat in itself. Typical escape room titles tend to be 2D and in some cases, can be rather bland. iEscaper!, on the other hand, fall on the other end of that scale with beautifully rendered 3D environments accompanied by soothing sounds.

The storyline is very reminiscent of Japanese folklore and history as you’ve entered an enemy ninja’s lair to steal secret scrolls and become ensnared in a trap preventing you from leaving. The objective is to escape and find your way through the three rooms where failure will result in your life. 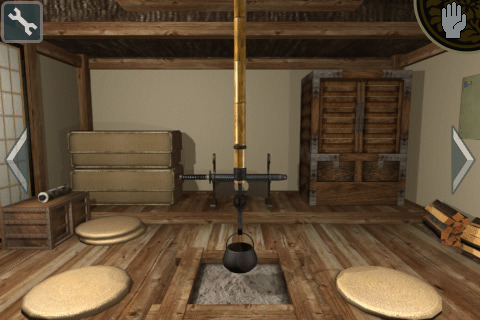 At the heart of iEscaper! is a hidden item game, but that is only half the battle. Once you’ve located items, deciphering messages typically found on scrolls and tablets are essential if you’re to unlock the secrets of acquired items. The fun and challenge comes from the assorted puzzle games that will test both sides of your brain in logic and imagination. In one room, it may be combining several items in order to unlock yet another puzzle, while others require activities be done in a specific sequence and include character and numerical sequences.

The touch controls are more than adequate with arrows appearing when certain movement is available, and you can easily navigate a room. As with hidden item games, tapping on certain objects will create a reaction such as opening a drawer or picking up an item. In many cases, you may even try random tapping in a vain attempt to locate items, and while that may help initially, the challenge will come from finding meaning in all of it. On occasion, dialogue boxes will appear to provide additional clues when tapping certain items or in most cases to reaffirm what you already know which usually isn’t much. One nice touch in iEscaper! is the use of scrolls and tablets. Often these items provide a wealth of information succinctly conveyed in simple drawings. However, they may illustrate how to reach a specific goal, but they won’t tell you what is needed to do so. 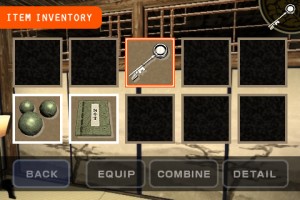 The game has an intuitive inventory system where collected items can be stored, combined or used. In fact, I could think of other games that could use a streamlined inventory system such as the one found in iEscaper!.

I mentioned that there are three rooms in iEscaper!, and while this doesn’t sound like many, I can honestly say that those three rooms will keep you occupied for quite a while. They are challenging to say the least with each room becoming progressively more difficult and dangerous. Without giving away too much, the first room is child’s play when compared to the second room and if you fail at solving the puzzles, well, it’s sayonara. The third room is even more difficult because the risks increase significantly, and the conclusion is incentive enough to finish.

Personally, I would’ve have liked more sound effects or even more of a continuous zen-like soundtrack. For a game where failure can have repercussions, the tone is strangely very relaxing, almost stress free…a good thing. The Japanese theme is one you don’t find often in escape room titles on the iPhone/iPod Touch platform. While three rooms is more than enough for an initial release, the dev has mentioned adding rooms in future updates, which should build out the game even further. A hint option may help with managing the difficulty level as well. What may be an interesting experiment is to add a different storyline either within iEscaper! or as a separate title to add some variety since I can envision this becoming a series.

iEscaper! is a beautiful game, and you will easily find the visuals on par with Myst, albeit on a smaller scale. While the escape room concept is the foundation for iEscaper!, it really extends beyond that by creating what I think is a unique soothing yet ominous feel. I can’t say that about too many other games in the space, and that speaks volumes for iEscaper!.