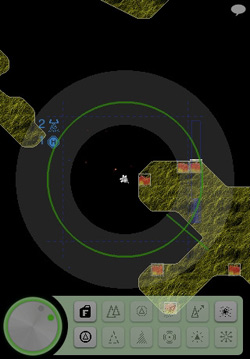 Of all the different ways I have of letting off a little steam during the workday, one of my favorites is getting involved in a quick, online match of XPilot (installed via Fink) on my Mac.  XPilot, which likely many readers have not heard of, is a free X-Windows-based online, multiplayer space game in the spirit of Asteroids and various cave-flyers, that offers several modes of gameplay, such as deathmatch, capture the flag, base defense, and racing.  It features minimal graphics and a server browser to choose from on-going games from all over the world.  It’s quite a lot of fun for those that don’t require photorealistic graphics and surround sound and has a bit of a cult following in the *NIX gaming communities.

And thanks to 7b5 Labs’ just-released iPhone port of XPilot [App Store], it’s a game that can now be enjoyed just about anywhere.  And not just over WiFi, but also over 3G and even Edge.

XPilot for the iPhone feels pretty much like the desktop version, but with a smaller play screen.  It works, though.  And just like the original, there’s a chat feature, so you can talk smack to those you are schooling.  (In fact, when I mentioned I was on an iPhone, three of the players in the match ran off to download it, allowing me to repeatedly destroy them — mwahaahaa!  I suggest this tactic to iPhone players everywhere…) 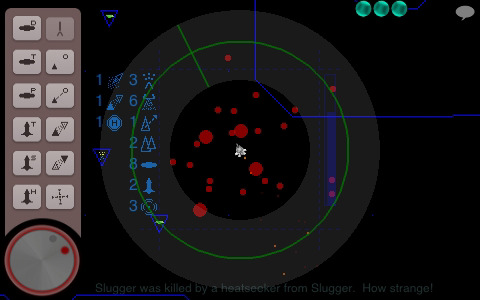 The iPhone version can be played in portrait or landscape mode, depending on the device’s orientation.  Control is handled via touch; a ring surrounds your ship, allowing for orientation control, with thrust kicking in the further you drag away from the center of the ship.  Weapons and power-ups are controlled via tap.  Controls work well, but are not quite up to the keyboard + mouse experience of the desktop original. 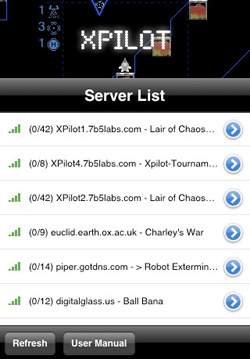 Those wanting to get a feel for the game before dropping $2.99 on the iPhone version can download free desktop versions from a variety of sources on the net.  This is an automatic buy for seasoned XPilot fans, and a great chance for those unfamiliar with the game to get on board.

XPilot for the iPhone is based on the advanced XPilot-ng code branch, offering various enhancements over the original.