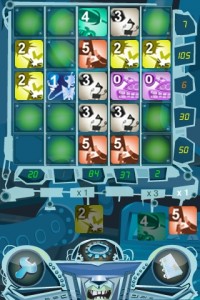 For those who enjoy numbers or think they need help with numbers, you may want to check out Reiner Knizia’s Robot Master [App Store], a neat game that looks easy at first, but can be quite daunting. It’s a puzzle game that is as much a test of your ability to plan as it is an assessment of your logic skills.

The objective is to score the highest points possible in any row or column. Sounds simple until you realize that the column or row with the lowest score is what counts as your high score. Confused? Don’t be because the game makes plenty of sense once you get into it.

Here is an exceprt from the game’s tutorial:

Take turns placing numbered cards down on a 5 x 5 grid to score lines both vertically and horizontally. The scores for each line are determined by the sum of the cards. Here’s an example:

Sounds easy, right? Well, here are a couple of twists: First, pairs of cards anywhere in the line count 10x their face value. Here’s an example:

Second, triple cards anywhere in the line count 100 points regardless of face value. Here’s an example: 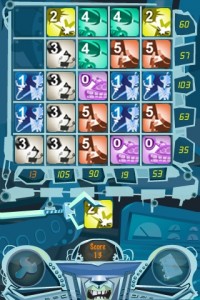 The game consists of 36 cards with values ranging from 0-5 with 6 of each. The play area is a 5×5 grid where these cards will be placed with a tabulation area at the end of each column and row. The game is nicely designed in a retro kitschy presentation with simple to understand scrollable menus. The soothing yet edgy soundtrack is similar to what you would hear in the background during sports highlights on the evening TV news. The touch controls are intuitive enough where you simply tap the location where the card is to placed.

The initial temptation for me was to build out a specific row or column with a high score. The problem is that this undoubtedly impacts the totals in other rows and columns because the game only counts the lowest score in a row or column. The 36 cards are randomly used in the game so you won’t know what will come up so it’s never the same game twice. With practice, I’ve gradually increased my lowest number, but really the key is to build evenly throughout because it only takes one misplaced card to screw you over.

Robot Master has two modes of play: Solo and Versus. Solo is the single player option and there are two settings: Easy and Tournament. Easy can be seen as a practice mode while in Tournament you can submit to the global score board for the High Score table. In Versus (which I find a lot of fun), you can either play the AI or another player via a hotseat multiplayer where one will play on rows and the other on columns. The one with the lowest scoring line loses.

Robot Master is a simple concept that will frustrate and entertain you at the same time. You can’t ask for more than that.