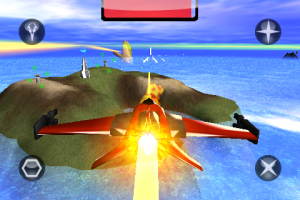 At E3, we met with 17 year old developer Josh Rosen who had an early build of his upcoming game SciFly 2. Rosen kicked off his iPhone developing career with his original dogfighting game SciFly [App Store]. The original version of SciFly was successful enough to encourage him to dedicate more time and energy into programming. Rosen has been programming since age 10 or 11 and has always had a strong interest in game development.

The early of SciFly 2 shows a more ambitious project with the introduction of various upgrades, weapons and enemies. The game is presented in a single world map with multiple islands. Each island must be overtaken by destroying all enemies. Movement from one “level" to another simply involves flying from one island to the next. This level system is similar to the linked island environments we saw in Glu’s Glyder.

This video of the current build shows off some customization and then actual combat:

Rosen believes the game may take 1-2 more months to complete.