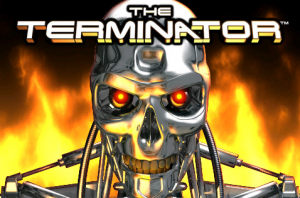 Big Head Games, who brought us International Snooker and cave-flyer Retro, in conjunction with Dark Horse Comics, has just released survival shooter The Terminator [App Store] for the iPhone and iPod touch to celebrate the 25th anniversary of the classic dystopian future thriller Terminator.

You play a young Kyle Reese sent on a mission that will unravel a sequence of events which will pave the way to finding and saving John Connor, the only hope for Mankind in its desperate struggle against the machine intelligence, SkyNet.

The game features two play modes.  Quick Play challenges you to use the weapons at your disposal (pistols, assault rifles, Gatling guns, bazookas, etc.) to destroy as many terminators as possible.  Story Mode places you in the first episode of a back-story that leads up to where the movie takes over, with a series of specific missions to complete on the game’s wasteland battlefield. 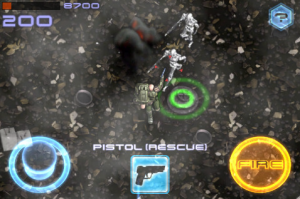 Readers were excited by The Terminator at first glance, as it appears, on the surface, to be quite similar to the highly popular survival shooter iDracula [App Store].  But, having spent some time with the game, I can say that Big Head’s movie-themed release really doesn’t hold a candle to Chillingo’s Transylvanian shooter.

The main problem is that the game is far too easy.  By default, the player controls character movement with an onscreen left thumb stick and auto aiming is engaged and activated with a press to the right thumb button.  Disabling the auto aiming feature, which presents a right thumb stick for aiming, hardly increases the game’s difficulty.  It’s simply too easy to blast through the light waves of advancing enemies and complete the included five missions.  Readers echoed this sentiment in our forums.  And, while there appears to be a future installment is on the way, that doesn’t excuse the initial release of its shallow gameplay.

For even the most dedicated Terminator fans, we’d have to recommend a pass on The Terminator. The developer has posted a gameplay video if you’d like to see it for yourself.