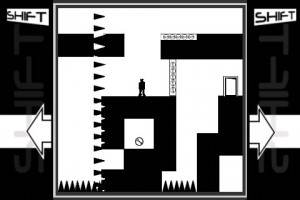 Armor Games has released an iPhone version of their popular Flash game Shift that offers a very neat gameplay mechanic.

The game is a puzzle platformer that requires you to run, jump and “shift" your way through levels. Shifting involves flipping yourself around and inverting the screen. It’s hard to describe but the first time you do it is one of those “woah" moments.

The iPhone version’s controls work very well with left and right on screen buttons. Jumping is accomplished by holding both buttons down and “shift"-ing requires a separate button. The Lite version offers a pretty substantial trial of the full version of the game which only costs $0.99. Meanwhile, you can also play the Flash version of the game here.

Anyone with any interest in puzzlers or platforms needs to give this game a try. The full $0.99 version offers 25 additional iPhone specific levels over the Flash version, which seems to be rather short. A video of the Flash version is available if you must see the game before you try it.