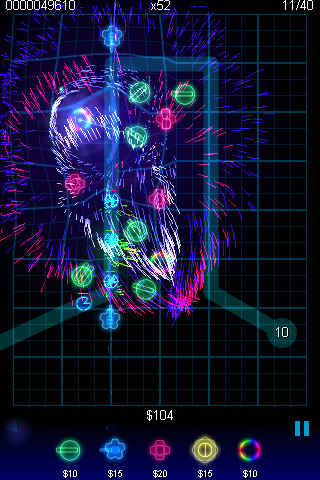 Just when you thought you were done with Tower Defense games comes an exciting new one from Critical Thought Games. geoDefense [App Store, $0.99] is a retro-inspired version of the game that offers some wonderful touches to the genre.

Like The Creeps, geoDefense offers set paths on which the enemies (“creeps") traverse to get to your base. Your job is to set up tower defenses to destroy the oncoming waves of enemies. There are 5 tower types with 7 upgrade levels each.

The graphics and animation included in the title offer a wonderful arcade-y feel and are a surprising touch. We recommend checking out the video embedded below.

The developer’s goal in designing the game was to make it more of an arcade action game than other traditional tower defense games. He describes his thoughts behind the design:

Once you get past the introductory stuff, and into the meat of the game, it can be very fast and require you to think a lot about what you are doing. Every level is beatable… but sometimes a very distinct strategy is required.

I was going for a very kinetic… high-energy experience. With some not-so-obvious game play elements. For example, the vortex towers have several different ways they can be used… and using them right is often key. Plus… the bonus system is key to highscores once you get past the “how do you even beat this thing" stage. But how you get better multipliers is something you have to figure out… I’m not telling you.
….
Tower Defense games are all about the “tipping point" where get to the point that your income is going up faster than the creep power and you’ve essentially won. But I worked really hard to eliminate that from the way geoDefense plays. It is possible to cross the tipping point in some cases, but because of the controls I have over each waves progression I made it so that seldom happens. This is why you often have to fight to the bitter end… and winning without losing any lives is pretty rare…. nothing is more exciting than fighting down to that one last guy and pulling off a victory!

Indeed, one thing this game has not been accused of is being too easy. Early reports from our forums have high praise about the game, though many have been unable to get past many of the “easy" levels — we suspect that this may come from applying more traditional Tower Defense strategies into this new game. If you’re looking for a new tower defense challenge, this is an easy recommendation at only $0.99.

The main negative with the current version appears to be the use of touch controls to place towers. This can be a bit awkward as your finger obscures your view. This and a few other interface issues are said to be addressed in a future update.

This video of Easy Level 3 was provided by Habakuk: