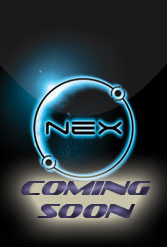 StarByte has posted a preview video of their upcoming first-person shooter NEX. The game is described as a squad based cooperative first person shooter:

You are in charge of a small human commando squad battling terrifying hoards of violent aliens in dark, gloomy, confined spaceship wastelands.

You’ll need razor-sharp reactions during solo missions and a combination of aggression and strategic planning when controlling your commando squad if you are to have any hope of meeting your varied mission objectives.

During these missions you’ll encounter a range of alien threats, culminating in an epic battle against the all-powerful leader of the alien race. Starting only with a basic Electro-Laser, you can collect ammunition upgrades for more power and also flame thrower ammunition. Next you’ll need to lay mines, rescue prisoners, set timed explosives, strategically seal off vital areas and defy mind-control tricks often in a fast paced race against time.

Depending on the mission you need to complete, you could be in charge of a squad of commandos which you must give orders to. These orders include “move", “follow" and “guard". Squad members will automatically fire at an alien presence and some missions will require you to work as a team to complete your objective.

The game is wrapping up development and will likely be released sometime in March.