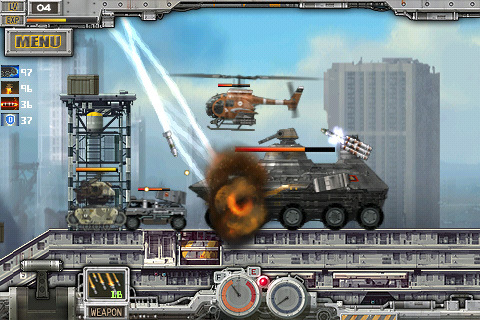 The game is split into 6 missions with multiple stages (4-5) within each mission. A total of 60 stages are provided and can range in length. The game involves driving your tank and destroying enemy tanks while avoiding enemy fire. Controls are very well suited to the iPhone and involve left/right tilt for tank movement. Tapping at your target to fire and tapping on a lever to jump.

With my limited time with the game (Mission 3), it progresses in difficulty, though the basic mechanic stayed the same. It involves shooting and jumping (dodging) your way through levels. One strange omission, however, is the lack of collision detection between your tank and the enemy tanks. You can just drive right through them (though you do need to destroy the bosses to progress).

The best aspect of the game is the number of powerup weapons and upgrades you can get for your tank. Powerful weapons upgrades include a machine gun, shotgun, howitzer (high-angle gun), missile, laser, nuclear bomb and more. You have to be judicious about your use of these weapons, however, as you only get a limited supply of each as you go on. I found it worked much better to reserve these weapons for “boss" enemies rather than waste them on the minor players.

There are a few “1.0" issues that we hope will be addressed quickly. The in-game menu button was not functional, and some readers are experiencing crashes (I personally experienced one). The in game documentation is also quite limited, so you should read through the iPhone description on gameplay. That said, the graphics and gameplay already provide a very polished experience, and I still think it’s easy to recommend at only $2.99.