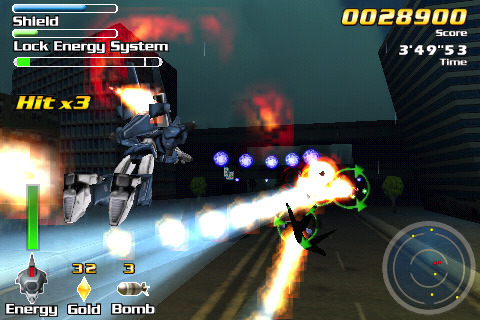 HyperDevbox Japan has released ExZeus [App Store] for the iPhone. This is another “on rails" shooter in the style of Space Harrier. Unlike Iron Man, however, you can actually control the movement of your character in Ex Zeus on screen.

The game appears to have been originally an arcade game built in Japan based on the research of one guy. It eventually found its way onto the PS2 (in Europe only) and finally the Wii as Counter Force. And Counter Force for Wii has been reviewed by IGN:

Counter Force is a fun game. In fact, once we’re done writing this review, we’re going to sneak away and play it again. Mixing the gameplay of Space Harrier with IR control and some “we do whatever the hell we want” artistic design and execution, Counter Force has the same kind of appeal as niche shooters like Sin & Punishment, if such classics were done by a chop-shop and never really saw the light of day.

IGN made no apologies for the overall roughness to the game, but found it to be a fun time. Other sentiments found on the internet point to the same thing. This is an old arcade on-rails shooter, but that’s part of the appeal. In fact, the game was originally slated for release in 1998 on Sega’s Dreamcast but was canceled before its release. 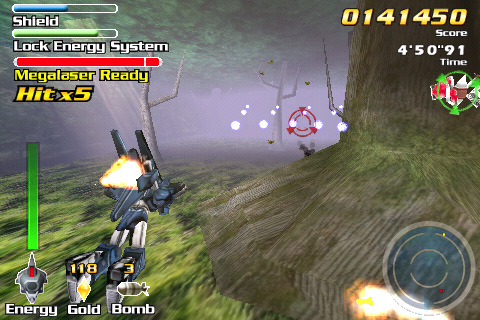 Some early opinions from our forum users were quite happy with the game.

Just played until I ran out of credits (you get 4 or 5 continues) and reached a water level, but what a blast! on my 2nd gen touch there was never any slow down and the game has a real smooth frame rate. the best looking and running game I own for my touch right now.

The game is pure arcade from short but sweet levels which run up to boss fights, you have to learn their attacks so next time you can dodge better. – Diablohead

The iPhone version of the controls are as follows;

The game features 5 different stages and is played in “arcade" style. You have 5 lives to continue but must start over from the start once you die. You can upgrade your mech in between levels by buying items in a shop.

There are videos of the Wii version which shares the same gameplay as the iPhone version.