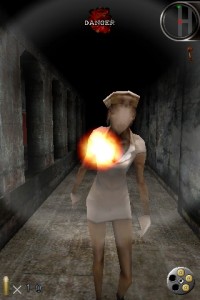 Early impressions of the european version have been reported in the discussion thread.

The game is a first person shooter in which you must navigate a maze of corridors with a 6-shooter in hand. The game is set in a slow paced “creepy" setting and really delivers on atmosphere. Controls are reasonable with swipe gestures providing forward/backward and turning movements. Meanwhile, the accelerometer is used to allow for some degree of free movement and aiming.

Some players such as K.D! seemed to enjoy the overall package and atmosphere:

Yes, it’s only 6pm at the moment that I’m playing it. You have a radio which emitts a static noise (like in the console versions) when an enemy is nearby… well there was a nusre a few feet in front of me so I assumed that what the noise was for, but when I turned around and saw one right on me from behind I did literally jump. You see, you don’t get any health, one hit and your dead, so it really helps in making things a little intense sometimes. Also, I once accidently fired off a round as I was walking around a corridoor and the echo scared the c**p out of me.

Another nice touch to the game is that your revolver must be reloaded manually by aligning the bullets with the chamber using the accelerometer. This approach requires a steady hand which can be difficult with zombie nurses wandering around the corners.

Not everyone loved the game, however, and some thought the game was too repetitive and simple.

Based on our limited play, it seems both sentiments are likely accurate. This gameplay video (not recorded by us) shows the basic mechanics of gameplay, but curiously does not demonstrate the accelerometer-based aiming which can be required later.