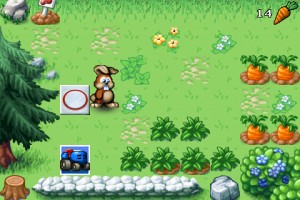 As Wikipedia describes the game,

Bobby Carrot is a puzzle game, the object of which is to collect all of the carrots in a level, then reach a point on the map to ascend to the next. In addition, there is a alternative mode where one creates Easter Eggs, made more challenging by the fact they cannot be passed over twice. Throughout the game, players are met with various obstacles, from steel rabbit traps and sliding gates to locks needing a key. Later games also added water, tractors, and a bazaar to the initial concept.

In a recent post to our forums, the developer shared a new sneak-preview video showing one level of gameplay.  (A higher quality MP4 version can be found here.)

FDG expects to have the game finished sometime this month.  Stay tuned for a full review when Bobby Carrot hits the App Store.