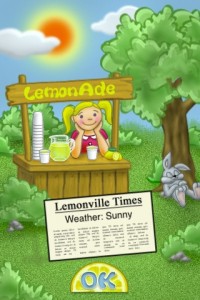 Maverick Software‘s Lemonade Stand is now available for download in the iTunes App Store at a price of $0.99 [link].

Lemonade Stand is a modern iPhone remake of the classic basic economics game that was ported to the Apple II in 1979 and bundled with Apple II computers through the 80s.  Although the graphics have been given a notable overhaul, the author was able to preserve the original gameplay and economics.

After tracking down the original game and running it on an emulator in its low-res 40×40 graphical glory, I decided it really needed a face lift. So while I kept the gameplay and economics (even using all the original game’s simulation formulas), I had an artist make some great looking new screens for the weather forecasts and financial report, and did a custom iPhone slider interface to let you set your sales options.

I digitized the original music from the Apple II game and its software synthesizer, since it is so recognizable to anyone who played the game before.

Most who grep up in the 80s with an Apple II will fondly remembed this simple classic which garnered an enthusiastic reaction in the comment thread to our original post made earlier this week.