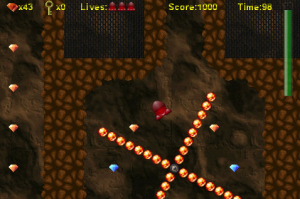 Oliver Pasqualini has recently released a 2D cave-flyer for the iPhone called G_Force [App Store].  As a particular fan of the genre, I was excited to see the game appear in the App Store and was anxious to try it out.  (I am always hoping for an iPhone title that approximates my all-time favorite mobile game, RocketElite.)  And while G_Force is an otherwise well-designed game, it has one fatal flaw that ruins the feel of what could be a very enjoyable title.

Like the typical cave-flyer, G_Force puts the player in control of a spaceship that must navigate an increasingly intricate system of caves filled with various obstacles (both moving and not) in order to complete a task which, in this case, is the collection of a certain number of gems within a set time limit and with a limited amount of fuel.  The game utilizes the iPhone’s accelerometer to control the orientation of the ship and thrust is controlled via touch.

As is the case with most games of this sort, gravity and inertia play an important role–the ship can’t just stop on a dime.  And here is where G_Force fails.

In nature (and in most other games of this sort), when an object reaches the top of a parabolic “throw," it hangs slightly at the peak and then begins to descend.  In G_Force, when the ship reaches this point, it is subject to a mysterious, greatly extended sort of hang time.  It inexplicably just hangs at that point on the vertical axis for much longer than it should, before beginning to descend.  (See the video.)  This phenomenon ruins the feel of the gravity / physics situation and makes the game too frustrating to be enjoyably played.

Otherwise, the graphics are simple but sufficient and the game features a particualrly nice soundtrack.  Fortunately, this is a v1.0 release and it is well within the developer’s power to fix the physics system such that the ship will respond more “realistically."  Until that happens, iPhone gamers would do well to hold on to their $3.99.