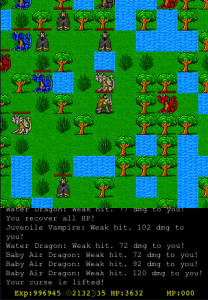 Mark Damon Hughes has released an iPhone version of his Perilar [App Store] game which was previously available in Java. As the developer explains, Perilar is his tribute to the classic role Ultima RPGs:

Perilar is my tribute to the classic computer role-playing games of my youth, most importantly Ultima I: The First Age of Darkness and Ultima II: The Revenge of the Enchantress, for my money the best games ever made. The giant world-, time-, and space-spanning quests, the insanely hard difficulty, the final showdowns with Mondain and Minax. I can’t put a big cloth map in the App Store, but in every other way, this is my “Ultima-like”.

Perilar for iPhone is described:

Perilar is a turn-based RPG, in the style of classic computer RPGs. You will create a character with old-school game mechanics, then explore a vast and dangerous world.

As you adventure, you will gain experience and levels–or die trying! Fantastic weapons and armor can be found only by defeating monsters, and more powerful monsters can only be defeated with proper weapons and armor.

As you become more powerful, you will face greater and greater challenges, until you can return to the castle and face the Harbinger Lord himself!

As an independent project, we’re not sure how much game time there is available for this $4.99 title. Online documentation provides you with a small glimpse into the gameplay, but the older Java version could also help readers decide.