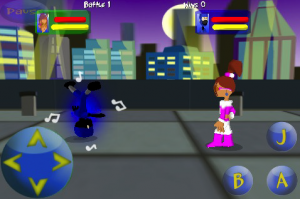 It seems like we’ve been talking about Funky Punch [$7.99, App Store] a lot in the past few days. The reason for the interest is that Funky Punch brings a new genre to the iPhone — a fighting game.

Set in an alternate universe where dancing recharges your energy, Funky Punch lives up to its name and is a solid addition to iPhone gaming.

The game is a reasonably straightforward 3D fighting game which uses on screen buttons to control the action. While I’ve been quite critical of touch screen buttons in the past, their use in Funky Punch seems natural and does not detract from the gameplay. While unrecognized presses still occur, due to the constantly changing circumstances during a fight, one missed move isn’t a game-ending event like it can be in other genres.

The D-Pad on the left of the screen controls your type and direction of attacks while the buttons on the right side of the screen represent J (jump), A (attack) and B (block). Combinations of both buttons can be used for special moves and special attacks. Special attacks use up your Funky Flow, and the only way to recharge is to dance (another button combo). Dancing, however, leaves you vulnerable to attack. The controls are easy to pick up so you don’t have to waste a lot of time before you are able to start playing the game.

Funky Punch has 8 distinct fighters with their own fighting styles, 5 different scenes, and 4 different gaming modes. The primary gaming modes include Quest, Trial, Survival, and Emotimania. The game also provides a nice tutorial mode to get you used to the controls.

Overall, I was impressed by the level of polish and finish to the game. Unlike so many iPhone gaming releases we’ve seen, Funky Punch is clearly a finished product.

The gameplay itself is also very enjoyable and it was easy to get sucked into a prolonged session. The gaming modes, however, are not very well described. Quest and Trial appear to be 10 fight sessions. Quest requires you to win sequential fights to continue, while Trial keeps track of your 10 fight record. Both Quest and Trial modes seemed too easy and I was able to win both of them in my first session.

Funky Punch keeps track of high scores for each character and for each mode, and expects that attaining higher scores will motivate ongoing gameplay. Maybe it was the way I was brought up, but high scores don’t generally motivate me in a fighting game. I generally want to fight progressively harder opponents until I get beat or I win the game. Fortunately, Funky Punch does offer Survival mode which can somewhat fulfill this masochistic desire. In Survival mode you keep fighting until you’re beat, but your health does not fully recover after each fight. This makes for a much more challenging game.

The Survival mode as well as ability to choose from eight different fighters brings plenty of replay value to the game. Along with its overall polish and fun gameplay, it’s easy to recommend this title.

The developers have provided this gameplay video which provides a good overview: