A title that is a bit of a curiosity recently appeared in the iTunes App Store.  SoMoGa’s Vay is a hefty download, weighing in at 50MB.  That’s no surprise, really, given that Vay is an iPhone port of a highly acclaimed SegaCD (CD-ROM meets the Mega Drive/Genesis) role playing game released in 1994. 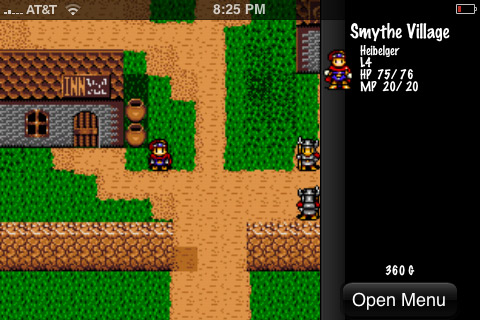 MobyGames gives a synopsis of Vay in a review of the SegaCD original.

“Long Ago In A Forgotten Corner Of The Universe….”-Opening Narration, Vay– In Vay, the player assumes the role of Sandor, Prince of Lorath. The game begins on Sandor’s wedding day. He is going to wed the lady Elin. The beautiful and mysterious woman that ended up in Lorath, it truly was love at first sight. (RPG veterans may recall a similar plot in Phantasy Star III, not that that’s a bad thing.-MM-) Sandor and Elin are about to exchange vows when, Lorath is suddenly attacked. Large mechs rain destruction down from the heavens. Most of Lorath is destroyed, many lie dead or dying. And it seems than the goal of the attack was the abduction of the Lady Elin.

From here Sandor, decides to go after Elin, rescue his love, and avenge the people of Lorath. It turns out the only way to defeat the might of the Danek Empire, and their awesome technology, is to claim the legendary armor of Vay. The very same armor that, nearly destroyed the world a millenia ago. (What a twist!-MM-) As per RPG tradition there are many twists and turns, monsters to slay, deaths to avenge, and good old fashioned saving the world. Thankfully the lengthy story is well written. (As we have come to expect from a Working Designs translation.-MM-) And filled with interesting characters. Speaking of characters.

“Port" might not be just the right word, actually.  Vay may more accurarately be describe as an iPhone “adaptation."  That’s because Vay for the iPhone appears to use exactly the same character and world graphics as the 14 year old SegaCD original.  Even the extensive, animated cut-scenes are taken directly from the original version.  The game plays in landscape mode with a 320-pixel wide world/map window next to a 160-pixel wide character status display.  The battle screen is a full 480-pixels wide and features much more detailed graphics than the main world/map screens.  SoMoGa has replaced the ornate in-game menu system with one comprised of standard iPhone interface elements.  Even so, the title has a very pronounced retro feel.

I am a huge fan of pretty much all things retro, but am a bit surprised that SoMoGa did not upgrade the character / world graphics of this iPhone outing to something a bit more in-line with the quality we’ve seen the iPhone to be capable of, given that many will surely be turned off by the title’s pixellated graphics. 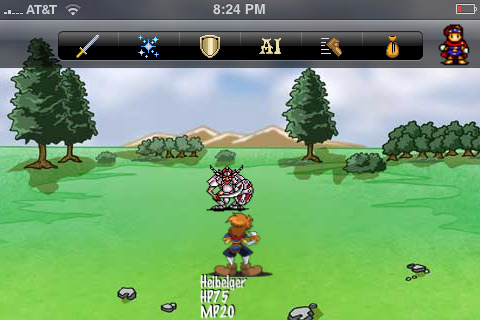 Gameplay in Vay is fairly straightforward and consistent with the typical top-down RPG of old.  The game involves trekking about a vast world consisting of castles, towns, caverns, and most every sort of terrain.  Several other characters found in the game world can join Heibelger (as he’s known in the iPhone version) on his quest and aid him in battle.  And battles, there are many.  Character leveling is achieved through victory in the game’s turn-based battle system in which characters can attack with weapons and spells or protect themselves with shields.  At times it seems that the hero’s party is attacked every five paces.  While I find this to be a bit excessive, character leveling is important when it comes time to battle the various bosses encountered in the game world.  Die-hard RPG hounds, however, may take the frequent skirmishes as par for the course.

The various towns strewn about the land are full of characters who can be engaged in conversation in which helpful information may be found to aid Heibelger in his quest.  Weapons, armor, and other items may be purchased with gold found in treasure chests or obtained in battle. The high level of character-to-character dialog ads a nice degree of depth to the game. 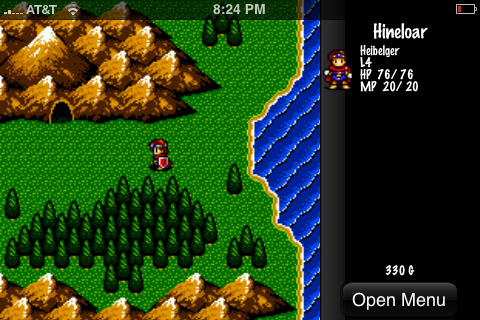 One of the particularly nice points of this title is its soundtrack.  The music is wonderful.  Every setting seems to have its own score and the sound quality is superb, thanks to the original title featuring CD-based audio tracks.  The music adds a great deal of atmosphere to the overall Vay gameplay experience.

Vay likely offers the most play time of any title on the iTunes App Store; the original offered around 40 or 50 hours of play.  Not the typical iPhone target play scenario.  So, who is this game for?  Anyone who is an RPG fan who is not put off by the game’s highly retro graphics will likely find Vay to be quite a value at only $4.99 on the App Store.

Features as listed by SoMoGa: