Gyrocade has released a futuristic 3D take on the classic game of Pong with a distinctive Tron feel through the iTunes App Store.  Vector Pong uses the iPhone’s accelerometer to control the player’s paddle, enabling him/her to serve, deflect, and spike a puck down a 3D corridor against a computer opponent or another (human) player thanks to WiFi-enable network play. 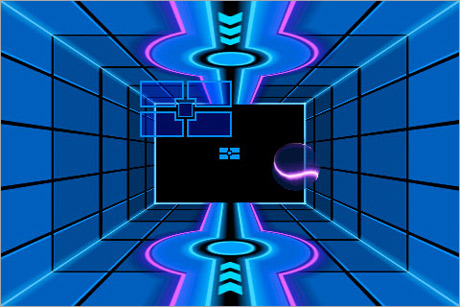 The game features three levels of difficulty, but even at the “Easy" setting the game is quite hard and the “Pro" level is apparently designed for robots.  However, due to the fluid gameplay and pleasant retro-future feel of this title, I feel compelled to keep at it in hopes of eventually getting a few consecutive victorious matches under my belt.  An “Easier" setting would be welcome, though.

Vector Pong has a feel reminsicent of the 80s classic Shufflepuck Cafe (which, incidentally, exists for the jailbroken iPhone as remake tuxPuck) and provides the player with the same satisfying sense of “WHACK!" with each successful deflection of an incoming volley.  Despite the game’s difficulty, it’s a lot of fun and seems well priced at $1.99.