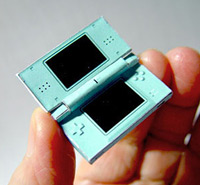 Nintendo is currently the king of console and handheld gaming.  Despite boasting notably less powerful hardware than its competitors in both areas, Nintendo’s own brand of unique innovation–the touchscreen in the case of the handheld DS and the “Wii-mote" in the case of the Wii–has given the company an impressive come-from-behind victory and placed their consoles on top.

Nintendo’s luck may well be about to change, however.  There’s a new kid on the handheld gaming block, a company who a few years ago also came back from behind in a rather impressive fashion: Apple.

During Monday’s World Wide Developer Conference keynote, Apple CEO Steve Jobs will be further demonstrating, and possibly launching, the iTunes App Store.  This one-stop-shop will allow iPhone and iPod touch users to download games and other apps with a simple swipe of the finger across a clean and friendly interface.  From anywhere.  It’s a far cry from the unwieldy process of downloading apps on any other handheld device out there today.

Combine this seamless distribution model with beefy gaming hardware–a CPU that’s over six times the combined clockspeed of the DS’s processors (and nearly twice the clockspeed of the PSP’s) and a screen with 50% more area than that of the DS’s dual screens combined–and you’ve got a winner, right?  Forbes points out that, beyond all this, it may actually be the very things that put Nintendo on top that will enable Apple to steal their gaming crown.

…Apple is the first to master a pair of tricks that have made Nintendo’s latest products so compelling–a touch-screen interface and the ability to pick up on motion. The key difference: Unlike Nintendo, which has created a gaming console with a motion-sensitive controller and a touch-sensitive handheld gaming system, Apple has crammed both capabilities into its iPhone and iPod Touch.

It may come as a bit of a shock, but iPhone and iPod touch users, you may well be carrying around the ultimate game console in your hip pocket.