Oasis Games
This is an emergency announcement! The disaster level is... UNPRECEDENTED. Don't even think about running and hiding! C…
Free
Buy Now Watch
Media 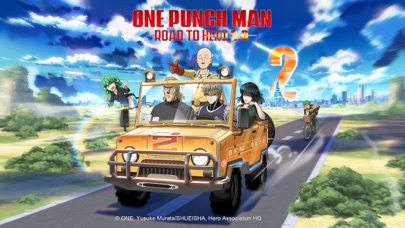 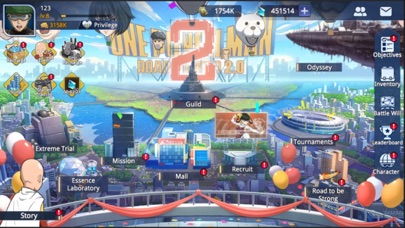 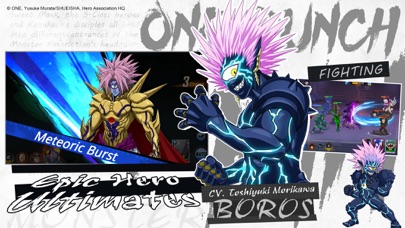 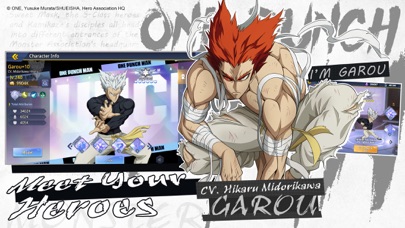 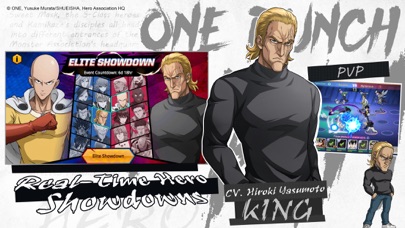 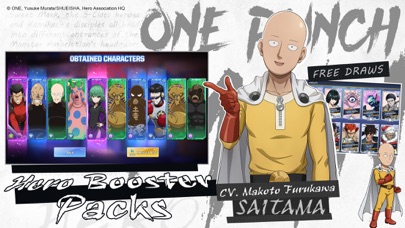 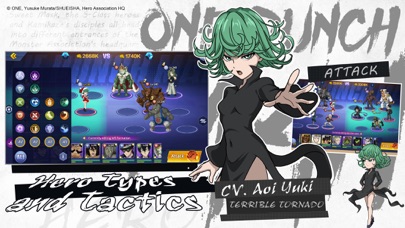 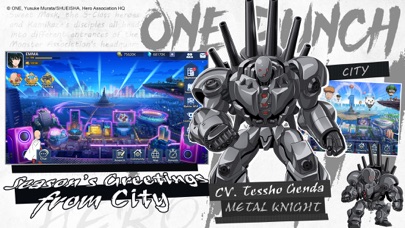 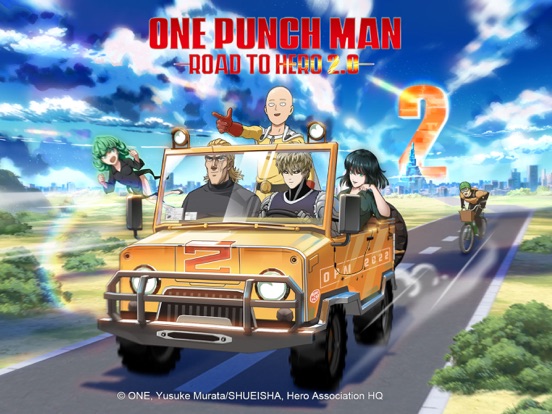 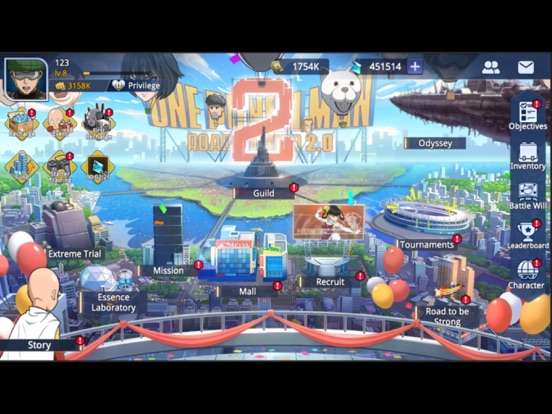 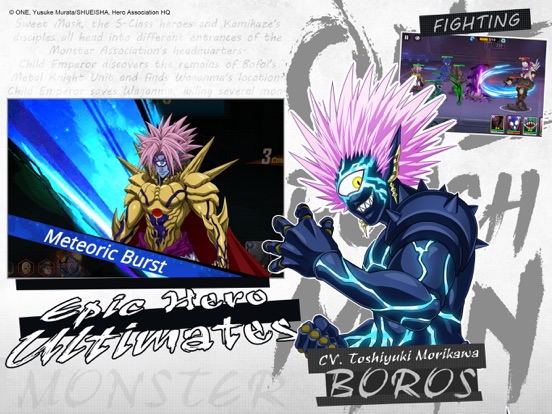 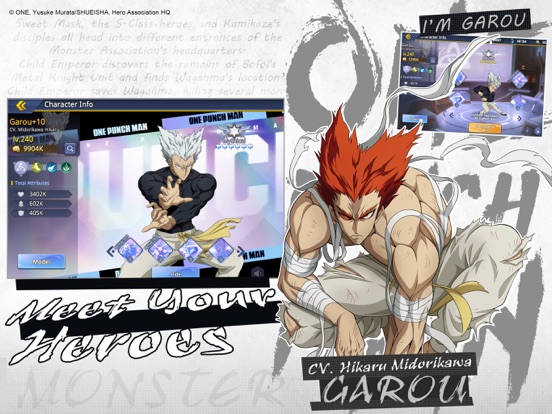 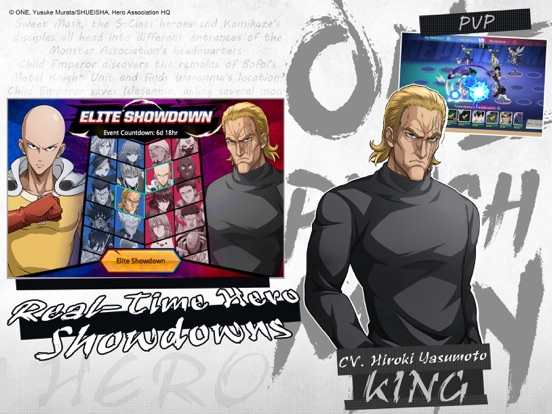 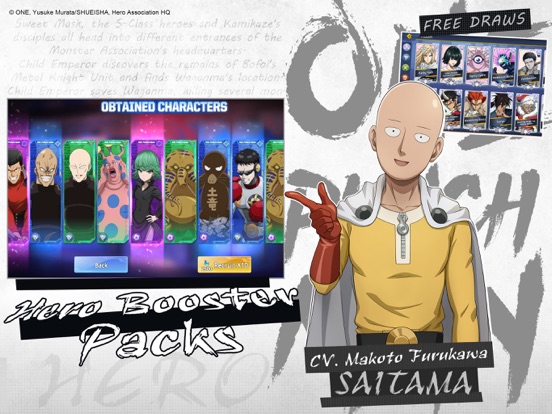 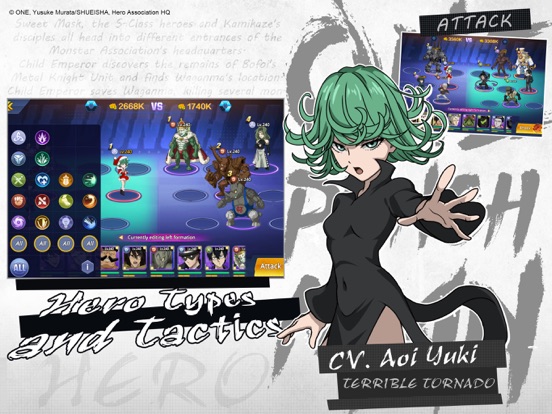 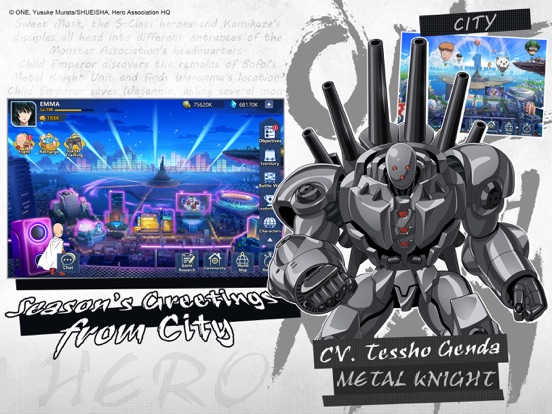 This is an emergency announcement! The disaster level is... UNPRECEDENTED. Don't even think about running and hiding! Collect popular heroes, powerful monsters, and fight your way through the Dark Matter Thieves Arc and beyond! Not everyone needs to train to the point that their hair falls out, and what you are capable of doesn't just mean physical strength. What's more important is to assemble a team that can maximize synergy among heroes! The officially licensed One-Punch Man mobile idle strategy card game One-Punch Man: Road to Hero 2.0 is here! Unique abilities and strategic formations! Abundant offline rewards! And a myriad of game modes and challenges await! You don't need to do 100 push ups, 100 sit ups, and 100 squats to become strong. Unique Play Styles Story Mode - Battle your way through the city and take down those enemies that allowed Saitama to make a name for himself! Extreme Trial - Overcome your limits as you challenge the endless tower. Could the you of tomorrow beat you today? Instead of giving in, move forward! PvP Tournament - If you don't want to get bossed around or mocked by the people around you... you need to get stronger! Prove your worth against other players in the Fight Arena! Road of the Strong - Choose the path that will reward you with random buffs and abundant rewards in this roguelike game! Battle Will - We human beings are strong because we are capable of changing ourselves! Your top five heroes will inspire others to become just as great! No need to train them when they train themselves! Exploration - What is evil? What is justice? Explore the labyrinth and find the answer for yourself while also enforcing justice. Dynamic Battles This wouldn't be a superhero game if there weren't epic battles and signature moves such as Mumen Riders Justice Crash or Puripuri Prisoners Angel Rush! Mix and match heroes and mysterious beings in countless formations to create unbeatable combos! Character Cultivation The more the merrier! All the extra cards can be used to level up your characters! Do not fight alone! For the latest news and updates, follow the link: https://www.facebook.com/OnePunchMan.Game2.0/ Find other Heroes: https://discord.com/invite/Bp975fb Trying to find a game strategy? Wanting to join a Guild? Please follow our Reddit: https://www.reddit.com/r/OnePunchMan_RtH2/ If you have any advice or feedback for the game, please send to: [email protected] About Subscriptions and Apple WebsiteSubscriptions 1. Pricing & Billing Cycle Enable Subscription (Weekly)" within the gamefor

Guide a mother and her child as they embark on a journey through magical architecture, discovering illusionary pathways and delightful puzzles as you learn the secrets of the Sacred Geometry.

Sequel to the Apple Game of the Year 2014, Monument Valley 2 presents a brand new adventure set in a beautiful and impossible world. Help Ro as she teaches her child about the mysteries of the valley exploring stunning environments and manipulating architecture to guide them on their way.

BEAUTIFUL AUDIO Immerse yourself in uniquely melodic interactive soundscapes, tailored perfectly to every step of Ro and her child’s journey.

Monument Valley 2 is only compatible with devices running iOS 9 or later.

.99 a week, which will be billed weekly (every 7 days). (Price may vary depending onyour location.) Enable " Subscription (Monthly)" within the game for .99 a week, which will be billed everynatural month (every 30 days). (Price may varydepending on your location.) 2. Automatic Subscription Renewal The App Store subscription is auto-renewed withpayment confirmed via your iTunes Account. Users can manage the auto-renew manuallythrough the iTunes/Apple ID Settings Manager.The subscription will auto-renew for the assigned billing period if the auto-renew featureis not turned off 24 hours before the current subscription expires. 3. User Agreement and Privacy Policy User Agreement https://www.oasgames.com/TermsofService(EN).html Privacy Statement https://www.oasgames.com/PrivacyPolicy(EN).html 4. Subscription Cancellation If you would like to cancel your subscription, goto 'Settings' on your iOS device --> 'iTunes &App Store' --> tap 'Apple ID' and then 'ViewApple ID'. Enter 'Account Settings; tap 'Subscriptions' --> 'Manage' and select thesubscription for ' One-Punch Man:Road to Hero 2.0' to cancel it.
Information
Seller:Oasis Games
Genre:Card, Role Playing
Release:Jun 29, 2020
Updated:Aug 10, 2022
Version:2.6.3
Size:914.2 MB
TouchArcade Rating:Unrated
User Rating:Unrated
Your Rating:unrated
Compatibility:HD Universal