Look, I don’t make the rules. If inkle releases a new game, I’m there. The folks at inkle have a fantastic knack for making narrative adventures that feel so much bigger than the confines of their designs, and Overboard! ($5.99) is no exception. It’s the classic murder mystery set-up: a passenger ship is making its way across the ocean on the way to New York. The night before the ship is set to arrive in port, one of the people on board is killed. Will the murderer be caught, or will they get away with their hideous crime? That’s up to you, but not in the way you might think.

You see, in this particular story, you are the murderer. Veronica Villensey has had enough of her loveless marriage. She helps her husband get a closer look at the waves, and he must have enjoyed it because he didn’t return. With eight hours remaining before the ship reaches New York, Veronica needs to make sure she not only gets away with her crime but is also able to cash in on her husband’s generous life insurance policy. It’s not the biggest of ships, but there are enough people about that you’re going to need to be very careful how you go about things. You have to use the limited time available to you to cover your tracks. 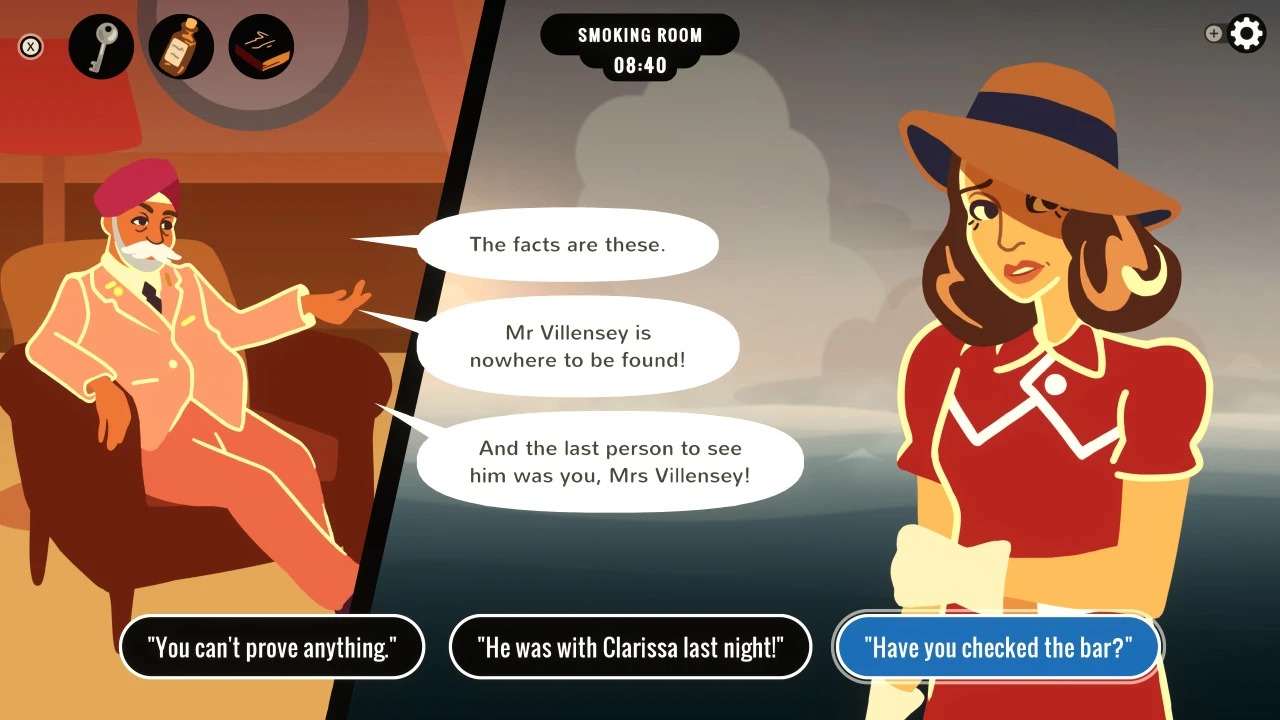 You’re free to move about the ship, talk to anyone you can find, and take various actions depending on your location. Everything costs some time, and everyone else on the ship will follow their own schedules and routines. Some events can only be triggered by being in the right location at the right time, and sometimes only if you’ve done certain things in advance. It makes the whole thing feel quite organic, especially on your first couple of runs through. It’s impossible to be everywhere at once, so you need to figure out who knows what and how you can deal with it. When the time comes, everyone will gather and you’ll find out how well you’ve done.

In the likely event that you don’t reach the best possible outcome on your first try, you’ll automatically head into your next run. Veronica will have something on her mind that will give you a hint about what to do this time, and the game will offer a few handy points to investigate. It never tells you exactly what to do, but the hints will at least put you on the trail so that you don’t just keep repeating your mistakes. It’s one of those little inkle touches that makes it easy to keep playing again and again, part of an excellent UI that is both functional and stylish.

That’s all backed up with some fantastic writing that brings this motley cast of characters to life in spectacular fashion. Veronica is the star of the show, of course. She’s a devilish woman who somehow manages to charm. You have a lot of control over the general flow of her conversations, but her words are definitely her own most of the time, particularly on the subject of dolphins. You won’t get as much time with the rest of the characters, but they shine in their own ways. The gossipy, conspiracy-prone Lady Armstrong. The honorable, savvy Major Singh. The dashing Officer Anders. God. Yeah, you can talk to God. Although the Almighty doesn’t care much for Veronica, you can get some hints and laughs by visiting the ship’s chapel.

The thing is, the more you dig into any of these characters, the more you discover. You can easily miss the presence of entire characters depending on what you do. You certainly won’t find out all of their secrets unless you find the right way to pry. But do you need to find out all of their dirt? Well, it might not hurt to have some aces up your sleeves. Sometimes it’s just interesting to see where things go, though. After all, it doesn’t take that much time to do a single run. Surely you can dedicate a few to getting to know everyone a little better? You’ll need to gather a lot of information to find your way to the best possible ending, so consider it work in the service of the greater good.

Overboard!, like some of the best adventure games, makes a complicated world out of what initially seems to be a very compact space. A puzzle box that gives back as much as you’re willing to put in. That it’s all handled with inkle’s usual flourish only makes it all the better. Do you think you have what it takes to pull the wool over everyone’s eyes and get away with murder? Pick this game up and give it your best shot.