While it’s fair to say that the granddaddy of all collectible card games, Magic: The Gathering, has not always fared spectacularly on mobile, one thing you can’t deny is that it keeps coming back around in new forms. With Magic: ManaStrike (Free), Netmarble might finally have hit on a way to keep the flavor of the brand fully intact while presenting its characters, creatures and lore in a cool new way.

That’s not to say that ManaStrike is built around some revolutionary mechanics, because it’s a real-time, live PvP strategy game — essentially a mobile MOBA (which is always fun to type or say). But it’s a very well-designed example of its genre, pulling off the neat trick of being both simple and deep, and you don’t even have to have any prior M:TG knowledge to enjoy it.

Let’s get you slinging some spells and summoning some Planeswalkers, shall we?

How to Play Magic: ManaStrike — The Basics

Magic: ManaStrike features quick and relatively short PvP matches against other players. Both you and your opponent have decks of cards (fittingly) that are based around a Planeswalker, a powerful spellcaster who is aligned with one or more of the different types of Mana, and can only use cards of those types. Planeswalkers are effectively your leader on the playing field, and while they are powerful, they aren’t invincible. You summon your Planeswalker simply by dragging them onto the field — you’ll find their card on the left side of the bar on the bottom of the screen. Once a Planeswalker is in play, their card is replaced by a skill, which you can also drag into play to activate. While Planeswalkers don’t cost Mana to summon, you can only put them into battle three times during normal play and once during ManaStrike, which we’ll get to in a second. 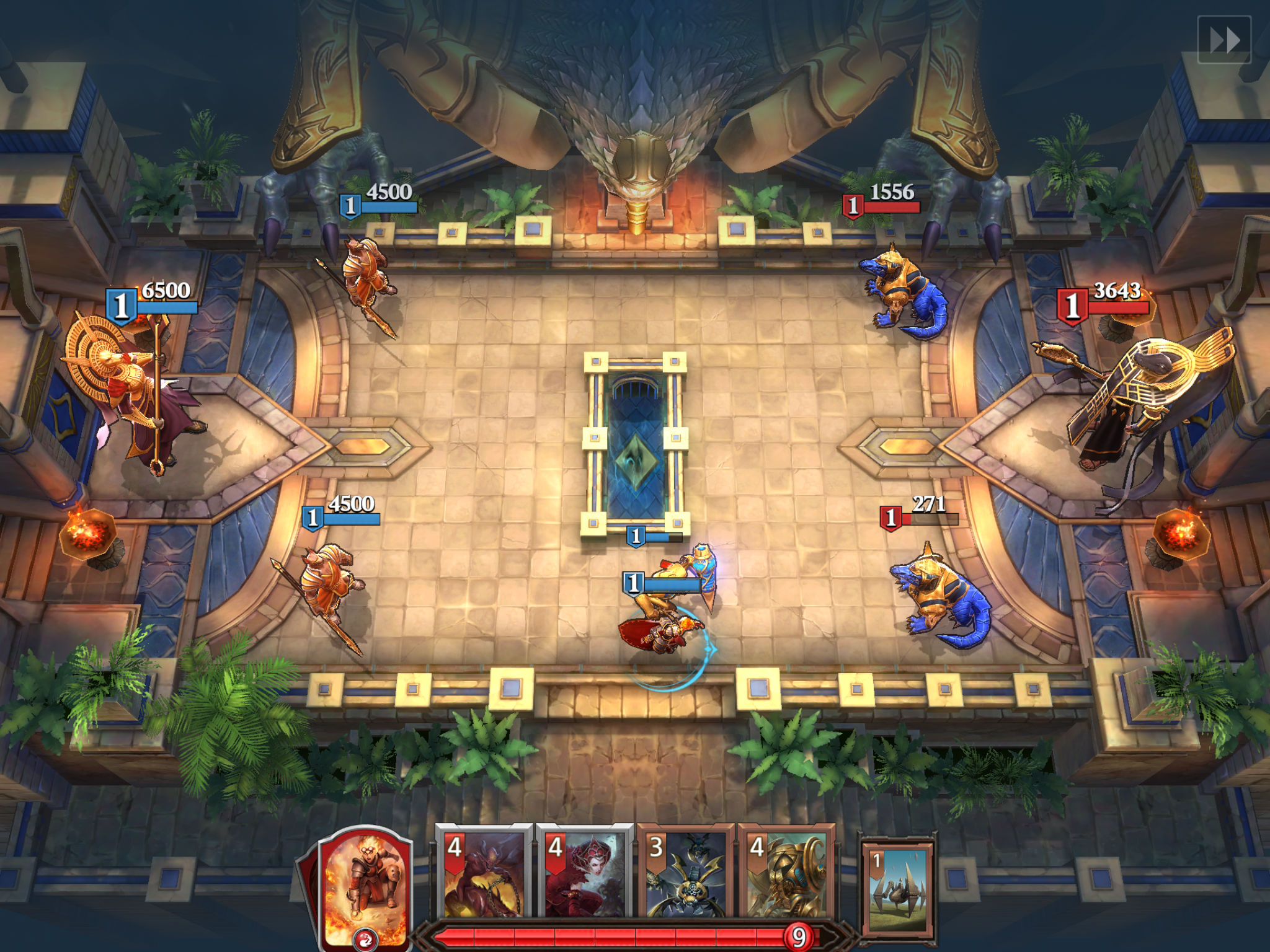 The goal of each three-minute battle is to outscore your opponent by destroying one or more of their Guardians. Here’s where people who have played MOBAs will feel comfortable with ManaStrike, because the playing field is divided into two lanes, top and bottom, with a Sub Guardian (which acts like a turret, making ranged attacks on your units) guarding each one. There’s also a more powerful Main Guardian behind them. Destroying a Sub Guardian earns you one point, while the Main Guardian is worth two points and eliminating it automatically wins you the match.

As you might guess, your Planeswalker alone isn’t enough to win the day, which is where the rest of your cards come in. You’ll see them arrayed at the bottom of your screen: Out of your deck of seven cards, four will always be available at any given time, and a fifth all the way at the right lets you know what card is coming next after you’ve played one from your “hand." The bar below the cards refills over time and tracks the amount of Mana you have — no need to worry about tapping lands here. Every card costs a certain amount of Mana to play, which is clearly displayed on its portrait. Provided you have enough Mana, you can play any of your four available cards simply by dragging it onto the playing field.

When your Planeswalker is active, you’ll be able to summon other creatures and place them anywhere near your leader (and the game makes it pretty clear where this is possible). Otherwise, you’ll need to drop them on your own side of the board, close to a Sub Guardian or the Main Guardian. Some cards are attacks or effects instead of creatures, and will display an area or radius on the screen as you drag them to show where they will take effect, and you simply drop them where you’d like to put them in play.

If no one wins a battle in the first two minutes, it’s ManaStrike time! For the final 60 seconds, things get truly frenzied as Mana refills at an accelerated rate, which if you’ve played games of this type before, should not catch you off guard. The key here is that each player receives an additional Planeswalker card during ManaStrike as well, so even if you’ve used all three, you get one more chance to put them to use — or another backup if you’ve still got some of your first three on hand.

How to Change Cards and Build More Decks

Even at the start of your Magic: ManaStrike journey, you’ll be able to choose from five different decks based around the five starter Planeswalkers — one for each color of Mana. You can access them by tapping the ‘Card’ button on the main game screen.

The game allows you to save five different decks at any given time, and you can cycle between them by tapping on the small number buttons once in the ‘Card’ menu. To modify a deck, you can swap out the Planeswalker by tapping on their portrait and selecting a new one from the screen that looks like this: 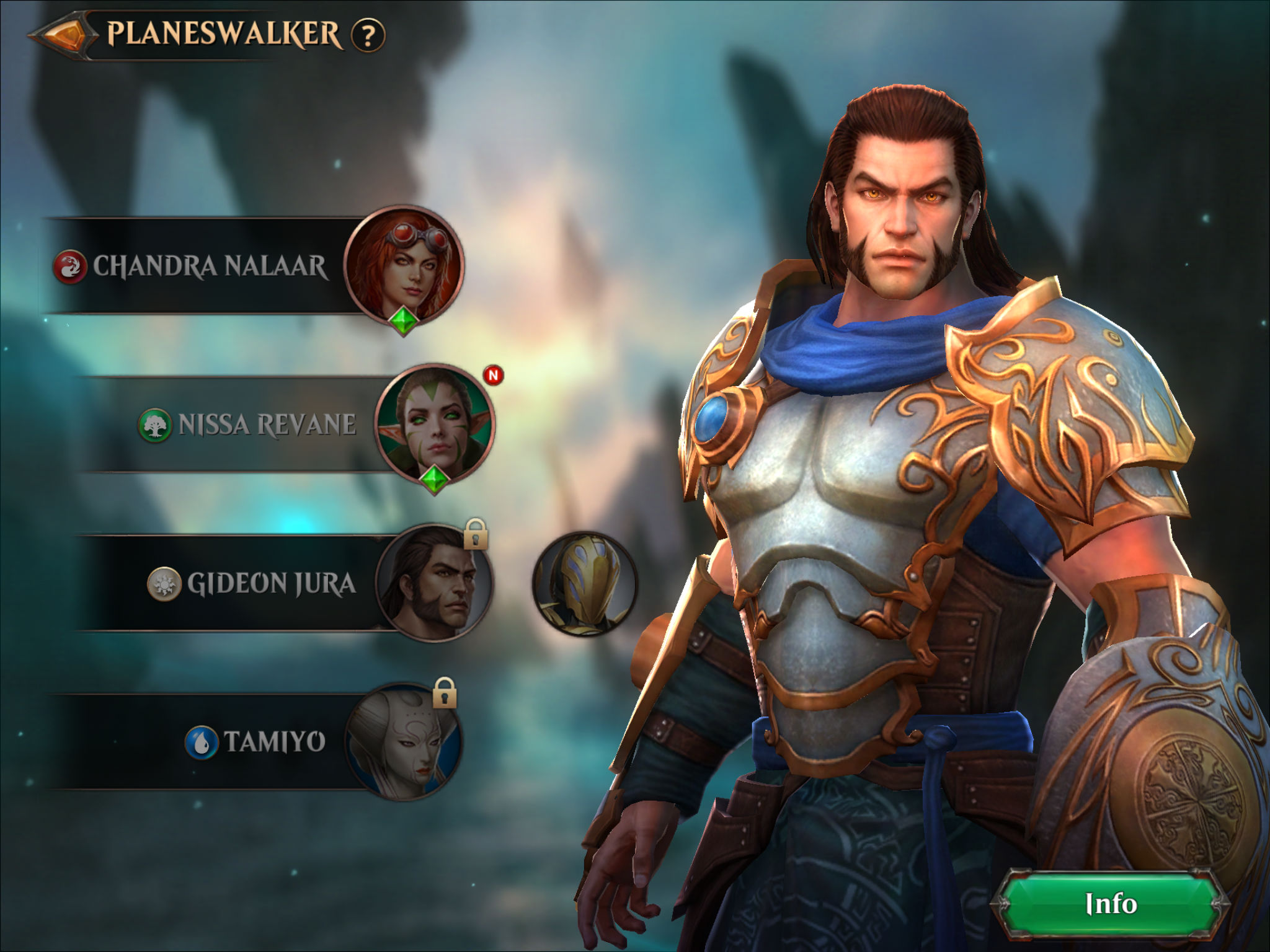 Changing other cards is as simple as dragging a new one from the selection shown at the bottom of the screen onto the one currently in the deck you’d like to swap out. Helpfully, ManaStrike only displays cards you own that are legal in the deck you’re currently viewing, so there’s no question about what you can or can’t use. 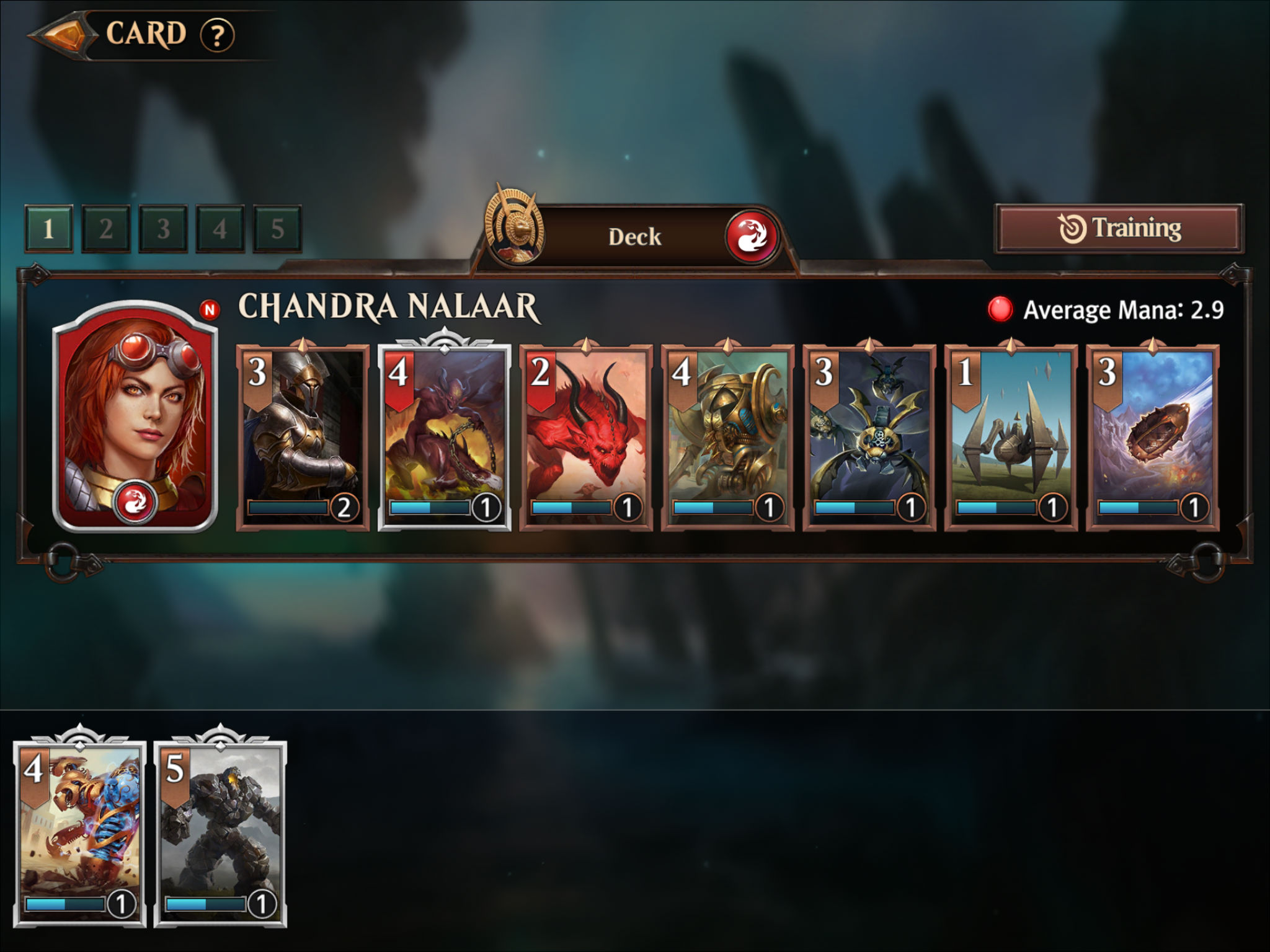 Bonus tip: Keep an eye on the Average Mana rating for your deck when playing around with deck construction, which is displayed on the right-hand side of the screen. As players of the card game know, you don’t want too many cards with a high Mana cost because you’ll find yourself unable to play anything in certain times, and the delay before you can act again can spell doom. It’s possible to make certain decks with a high Average Mana rating work, but each card needs to be very effective and they can be more difficult to handle for beginners. So if your deck seems to be losing often, lowering this score by swapping in some lower cost cards is a good place to start tinkering.

Got some favorite cards? You can make them even more powerful by collecting duplicates and then spending gold to level them up. It’s a pretty common mechanic in both card and mobile RTS titles and should feel pretty familiar to most gamers.

Rewards and Stuff: How to Get Free Cards

In plain old Magic: The Gathering, how well you do sometimes depends on your access to more cards. You still have to know how and when to play them, but more options generally means a better chance of success.

That’s not quite as true in ManaStrike, simply because there’s a much smaller pool of overall cards and the matchmaking system ensures you usually won’t face off against players with tons more cards. The deckbuilding restrictions help in this regard too. 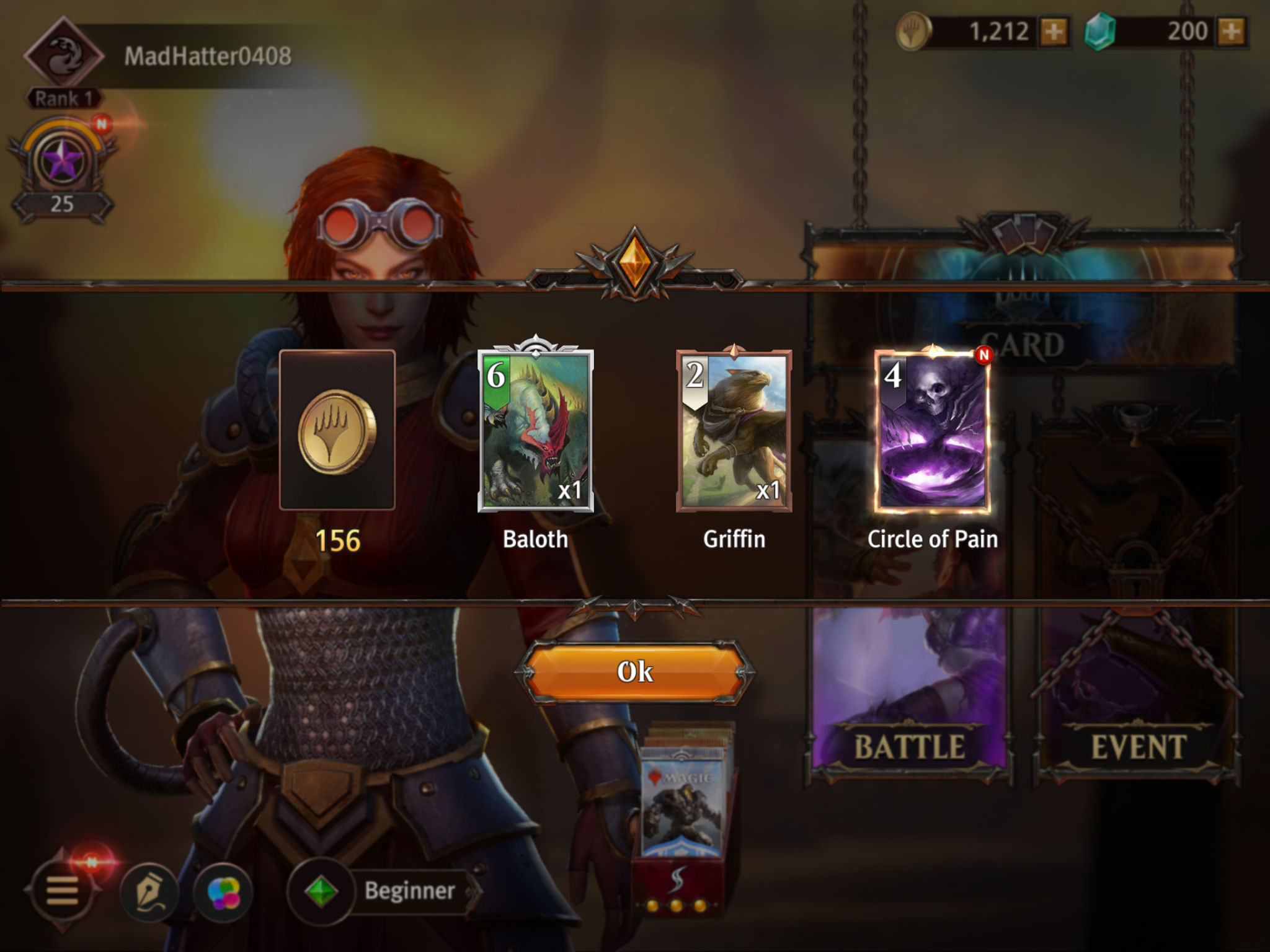 Still, you’re going to want more Planeswalkers and cards, because part of the fun is unlocking as much as possible and having the widest possible choice of play styles. The good news here is that you can get more cards simply by playing. For starters, the game offers rewards after battles you win, which come in the form of booster card packs that give you a few cards and gold (which you need to level up cards and make them better). You can work your way up to better reward boosters, but there’s a daily limit unless you choose to spend Gems, the premium currency, to refresh it. 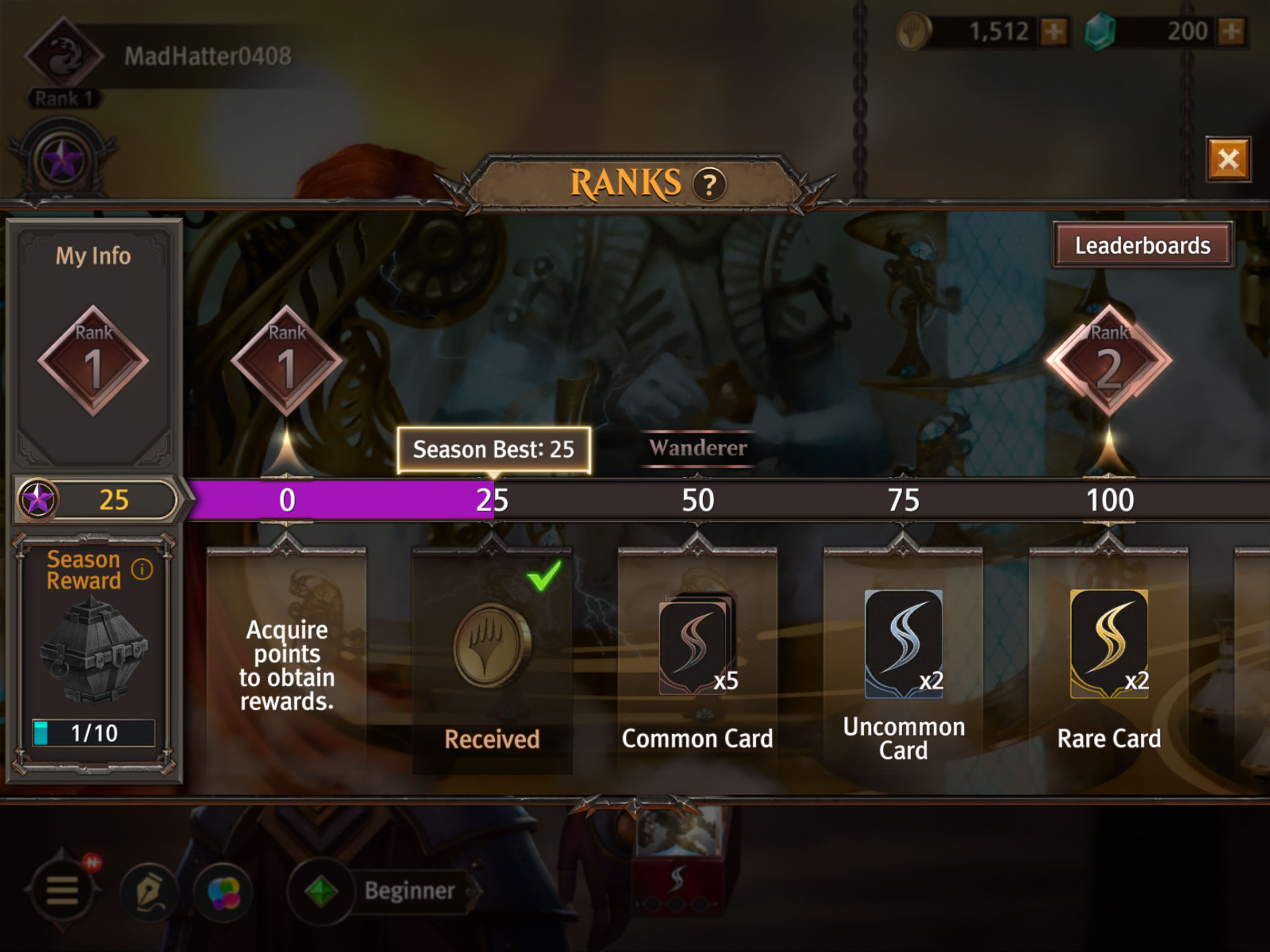 Magic: ManaStrike also utilizes a season system that pays out rewards as you go and for your season-ending rank. If you tap on the star symbol right below your profile name in the upper-left corner of the game screen, you’ll see your current rank and the rewards you can earn with further progress. Every victory gets you points to potentially improve your rank, but losses (after you’ve reached a certain rank) decrease your point total, so winning more than you lose is the key. 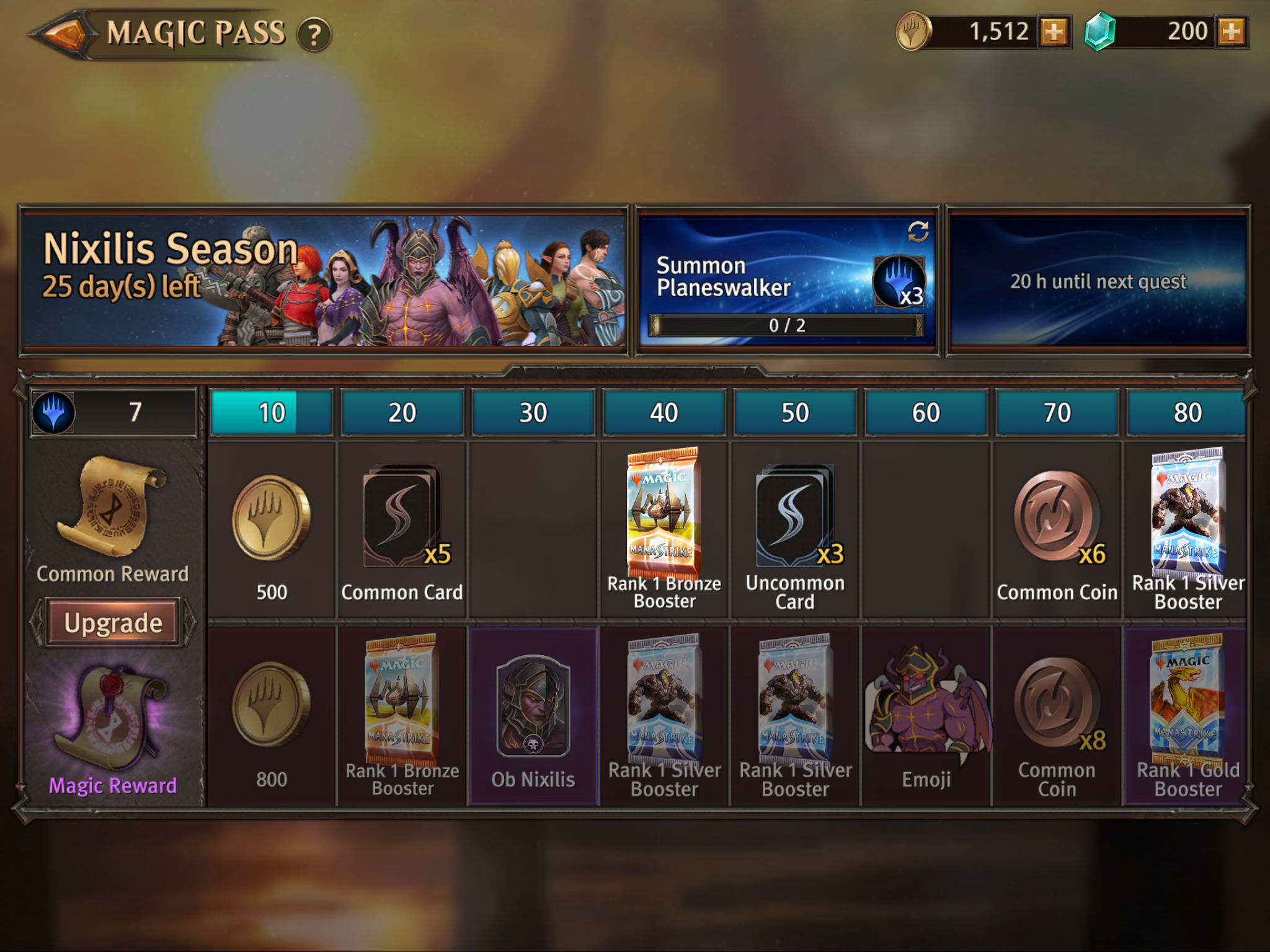 There’s also something called the Magic Pass, which is almost a requirement for PvP-style games of all sorts these days. The Magic Pass also centers on a season-based format, but it has its own way of tracking how you’re doing called Spark. Inflicting damage on enemy Guardians earns you more Spark, up to a maximum amount each day, and you can also complete quests to earn more. Tap on the ‘Magic Pass’ icon to see the current active quests and where you can earn more cards and boosters.

You’ll also notice there’s a paid tier for the Magic Pass, and you can thank Fortnite for making this trend in gaming so popular. The top row of the chart contains Magic Pass rewards you earn for free just while playing, and the bottom row is what you’ll get if you pay for the Magic Pass. Our focus is on the freebies, but just know that it’s an option if you find that you love ManaStrike and plan on playing daily.

Bonus tip: Keep an eye out for Events of both the active and passive variety as another way to grab some free cards. The ‘Event’ tab on the main screen unlocks once you’ve reached Rank 3 as a player, and it provides some different twists on normal gameplay and additional loot you can win. These modes are only around for a limited time each, so check out what’s popping before they rotate out. If you go to the main navigation menu, you’ll also find an ‘Event’ option there as well, which is worth investigating. For example, at launch, there was a 7-day check-in calendar for new players that culminated with a Gold Booster on the seventh day, all for free.