I’m lucky enough to live in a world where if I’m hungry, there is likely food in the fridge or pantry ready to be eaten. Thank goodness there isn’t an evil witch in my life, hiding all the food – that’s what has happened to all the adorable little monsters in NomNoms (Free). They’ll need your help to fly high and reach their meals, each equally cute and often punny. But, aside from all the kawaii-ness contained within the game, does it deliver a great experience?

If you’re looking for a deep narrative experience, NomNoms isn’t it. The premise is simple: an evil enchantress stole all the food-containing eggs and put them out of reach. It’s up to you to help the NomNoms sore to new heights and nom-nom away. Each level includes an egg, five coins/gems, and obstacles. Shoot your chosen NomNom (I love the sparkly-eyed Lucile) from a slingshot at the bottom of the screen. As long as a hatching slot is open, your NomNom just has to graze the egg to snag it. Some obstacles are permanent, but like rules, others are just made to be broken. And it’s easy to know the difference, as any unbreakable blocks look like part of the environment but breakable ones are skinned a bit differently. In some levels, there are cannons to help propel you to the eggs, adding a slight twist to the formula. 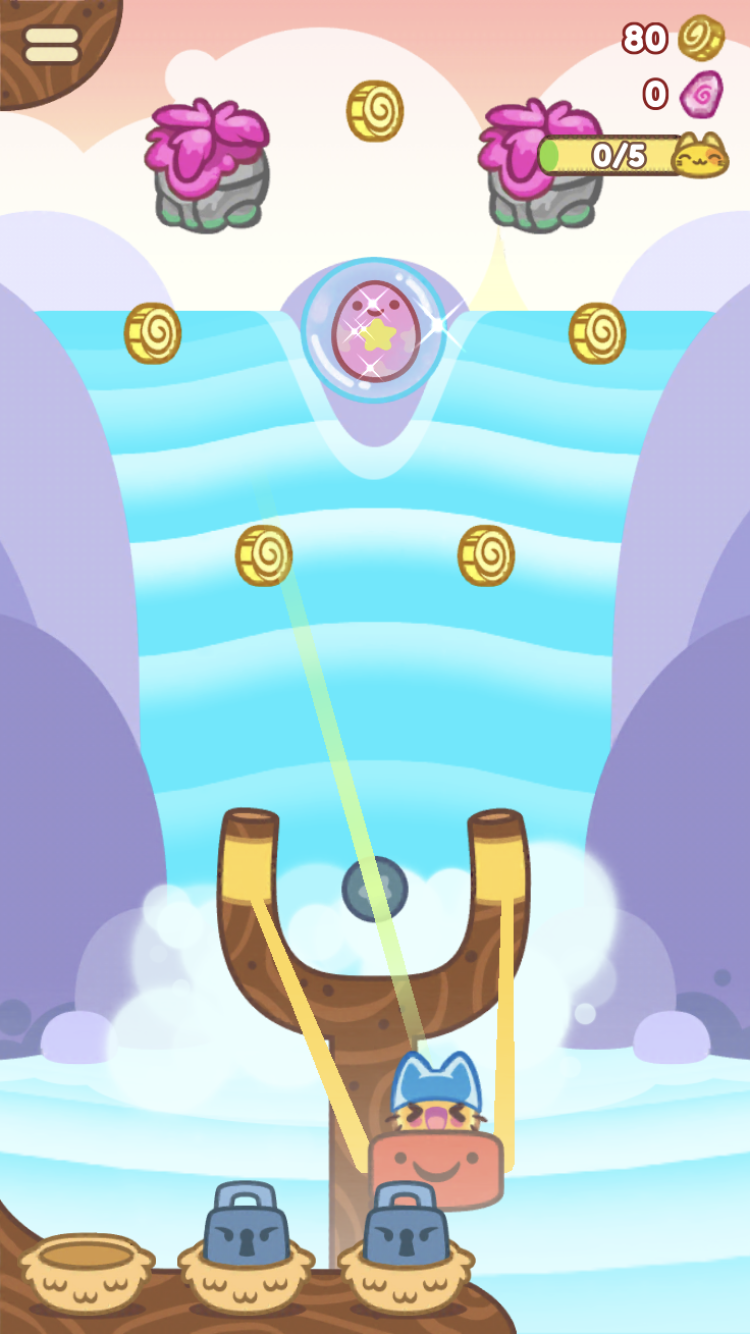 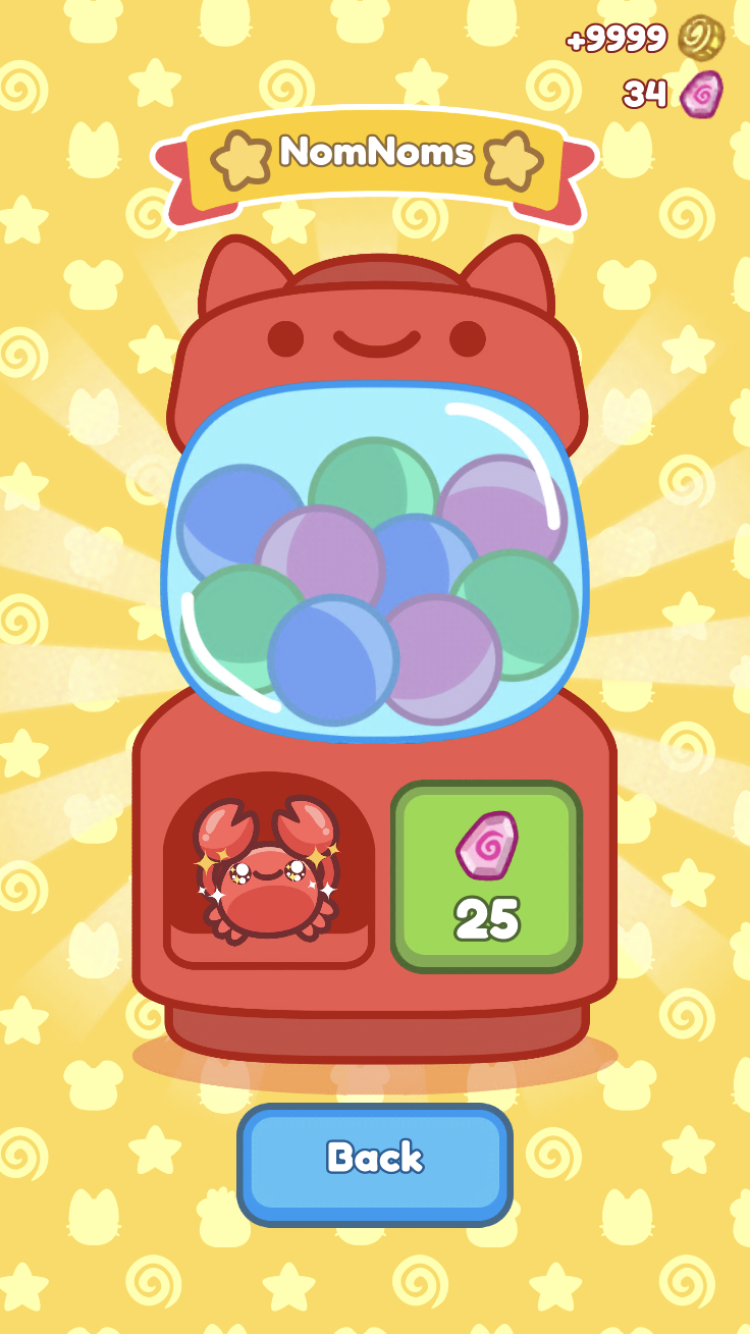 Sometimes, rarely, the UI overlaps elements in levels that need to be seen; for example, the coin collector gauge can cover a triangular block that’s needed to redirect your NomNom towards its target(s).

Your NomNoms then need to wait for the egg to hatch and their food (or sometimes a pile of coins) to appear. At this point, you can continue to toss your NomNoms into the air to get any missed coins, or progress to the next level. The problem is, without an open hatching spot, there isn’t much point in trying the next level. So you need to wait, on average about 20 minutes. The game has notifications to draw you back intermittently, but goes radio silent when your egg is ready to hatch. This would be an incredibly useful thing to remind players that the world of NomNoms is ready for them.

The game’s currency is twofold, coins and gems. Coins speed up hatching time. Gems are the premium currency, required to unlock new worlds (just a level reskin that gets mixed into the rotation) or more hatching slots. And here comes the problem: it can take upwards of a week to earn enough gems to unlock a new hatching slot, so you’re essentially limited to one level at a time until the current egg is ready to hatch – and you’ll have to set a timer if you want to know when that happens.

Levels appear in random order, so you can’t go back and replay one if you forgot to grabs any coins or, god forbid, gems. Gems are too difficult to come by without paying – either that, or what they’re used to purchase costs too much. As I stated earlier, it can take up to a week to get the 20 gems needed to open a hatching slot or 25 gems for a new NomNom, and lord knows how long to open a new world at the cost of 100 gems. The worlds aren’t mandatory, but they do add variety to the levels which is a nice feature after you’ve played a hundred of them.

Collecting is key, and the entire reason to play. You collect cute animals, the titled NomNoms, to customize the play experience. You also collect a variety of food stuffs, each assigned a level (common, rare, super rare). If you’re not into collecting, the game may lose appeal rather quickly. But I’m all about catching ’em all, and have a problem leaving tasks incomplete, so I’m all for the collection aspect. 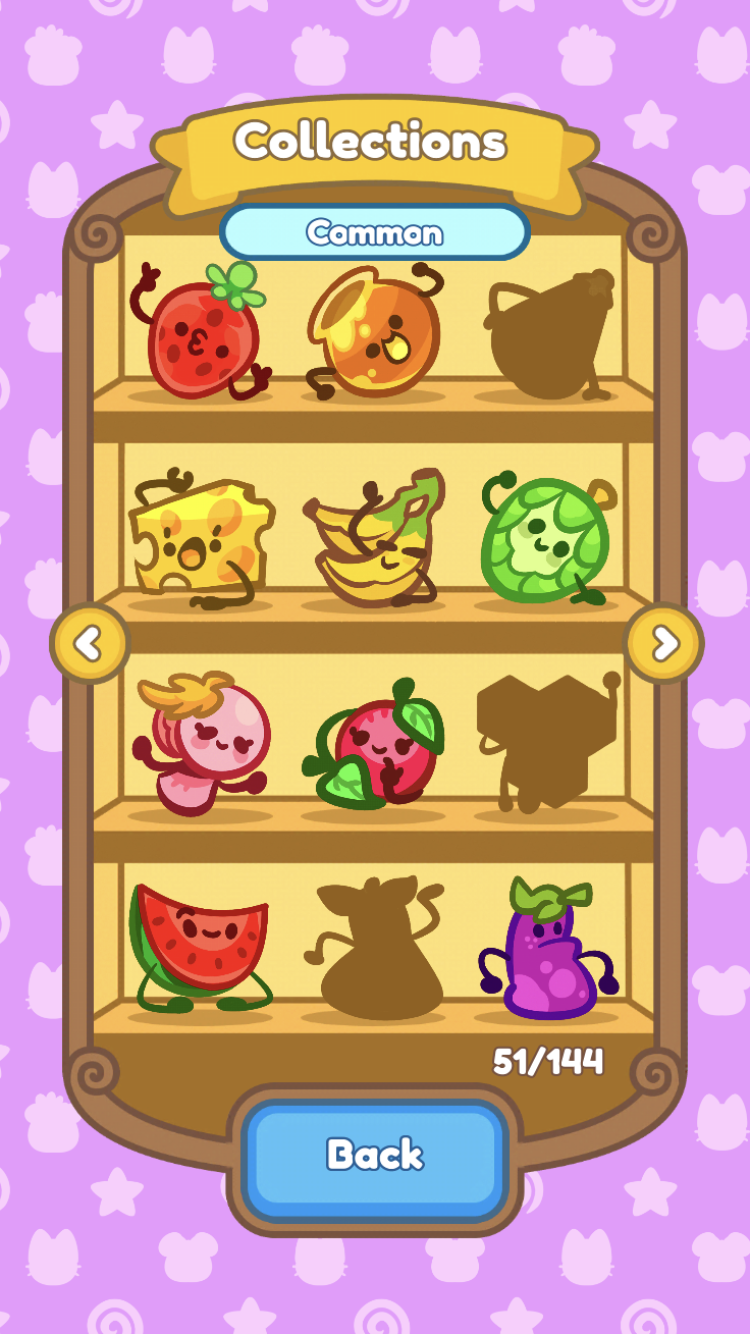 I’ve collected dozens and dozens of foods to date; my favorites include:

My least favourite food is the Oni Girls, who make a rather tasteless joke about racism (which I never find appropriate).

There are certain elements of NomNoms that I have true appreciation for. This is practically unheard of in F2P titles: a skip level button. Watch a short video ad, and skip a level you’re stuck in. It’s easy peasy. And to keep me coming back for more on a regular basis, there are daily rewards of coins and gems. The gems are especially helpful.

I’m not used to a mobile game, even a free-to-play one, that feels so limited in terms of play time (the one egg every 20 minutes thing). The collectibles trickle in, and it will take weeks to get them all – a good thing for F2P titles, keeping players coming back. I expect NomNoms is either the type of game to grab you, or something someone would pick up and delete almost immediately.