With only a very few exceptions, the endless runner genre has never held much appeal to me. Without fail, those I have played at length offered some mechanic, some design choice, some unique twist unseen elsewhere: Canabalt was lucky in that it was the first; Run! happened to offer a fascinating 3D environment; and Temple Run was both flashy and portable. There are others, but none I care to name. The rest fade into mediocrity.

Fortunately, Radian Games is here to lend their expertise in unique twists with the just released Scorcher ($2.99). With its minimalist visuals, an upbeat soundtrack, and intuitive controls; Scorcher, in a unique take, brings a giant sandworm to the marathon. I can’t say that I’ve seen that before!

Songs seem to develop and change with distance travelled. Since I have yet to break twenty thousand meters on any canyon save one, I suspect that I have not heard the complete list. What I have listened to, however, I have enjoyed—the upbeat music is welcome company in a desert canyon where sandworms and sandsharks are prowl. The sound effects, on the other hand, are lacking. While certain UI elements have sound effects, and they are good, many things that I expect to have sounds associated with them, and probably should, do not. Interactions like jumping, bumping into a canyon wall, bumping into a worm, crashing, catching a shark, eating a shark… the list goes on. While I cannot entirely rule out simply missing them (though it is quite unlikely), they would have to be very quiet for that to be the case. More likely, they are simply not there.

Visually, we have a pleasing minimalist style with a crazy amount of particle effects. Dirt trails following the sandsharks? Check. Sand flying from the tunneling sandworm? Of course. Plasma, flames, and debris from behind the ship? I thought you’d never ask! These touches offer a certain visual flair where the style becomes a little too repetitive, and provide a sense of momentum to accentuate the displayed speed without detracting from readability. There seems to be minor framerate issues when large quantities of particles are visible at once, however. Nothing too bad, but it’s a little annoying when it happens.

While the art style is unchangeable, there is an option to adjust the viewing angle. By default, the camera is angled slightly—so there’s a nice view down the canyon, and the walls are a little sloped. This can be changed to a top-down view, however, which somewhat reduces the amount of visible canyon in favour of more defined edges. Practically speaking, the effect on gameplay is negligible. Having well defined walls is a boon for a few maps, particularly Silicon (the first level), but seeing just a bit further and knowing what’s coming up can (and usually does) help more. In the end, though, it just comes down to personal preference. 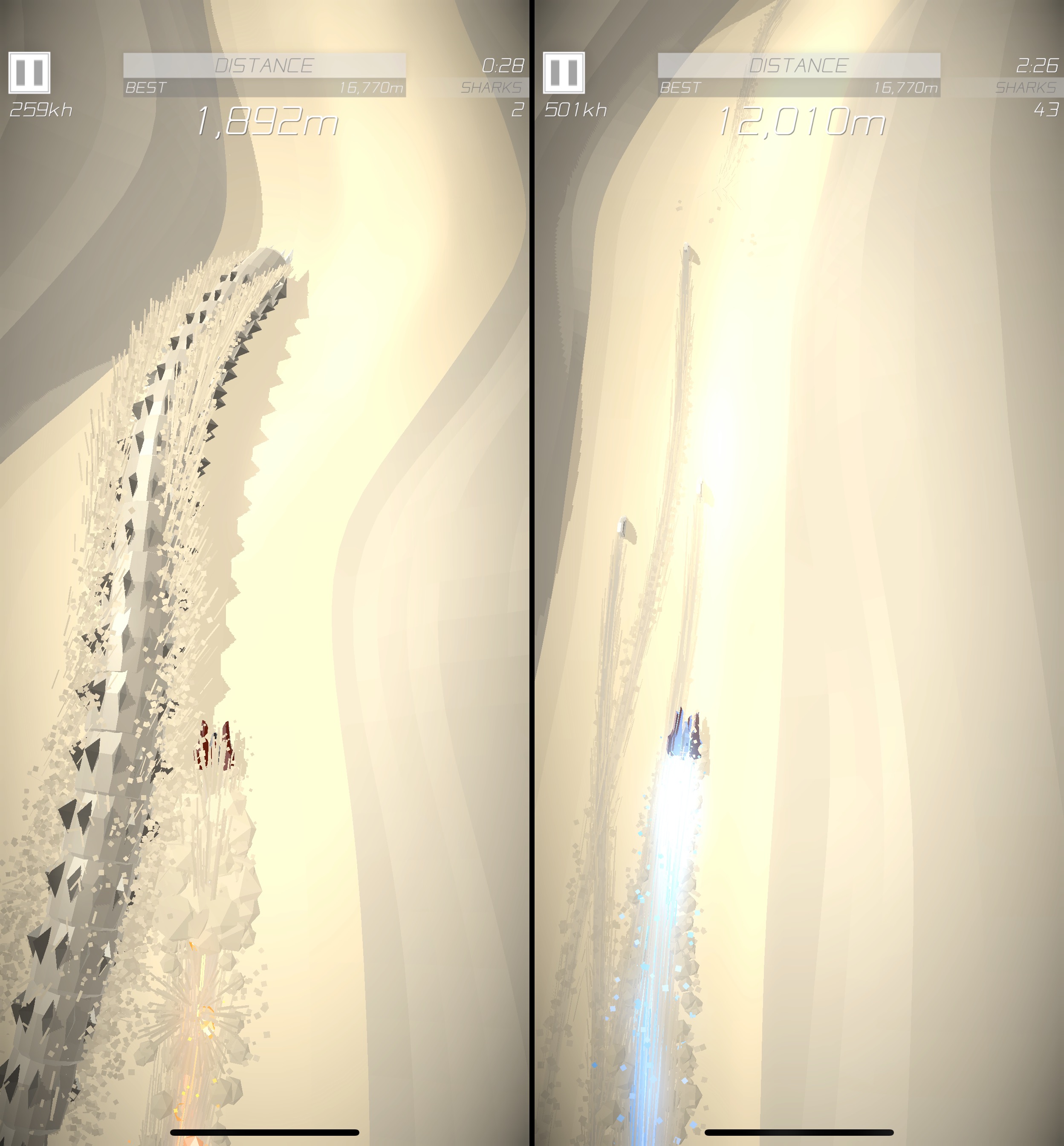 Controls are responsive, although they take a bit of adjustment. The initial idea is to navigate with a thumb at the bottom of the screen, and that can certainly be done with a different sensitivity or control scheme, but the default is set to absolute finger position—meaning the best place for your finger is directly on the ship itself, not the bottom of the screen. This took a few attempts for me to figure out, but it made a huge difference once I did. Go figure, right? For players who prefer to dodge canyon walls with a ship instead of their finger, there is an option in the menu to change from an absolute scheme to a relative scheme, along with two additional sensitivities (High, and Max). There are also options for jumping—the default is to jump on lifting the finger, but that can be changed to a swipe towards the bottom of the screen, or jumping on a secondary tap. Furthermore, an alternate jump can be assigned to any of the two remaining options, or completely unassigned.

All that said, however, Scorcher is hard. Changing the camera angle may help in a few situations where the walls aren’t clear enough, or when you need to see just a bit further to avoid those mines, or plan around a worm, but it isn’t a magic bullet. Neither is changing the control scheme, although that can certainly help as well. Between the frequently tight corridors, unpredictable worms, and high speeds, this game is difficult. It will take a few tries to beat most canyons, and several more to go beyond just “beating” them. Fortunately, for those of us who just can’t crack a level, there are two possible conditions to unlock the next: Total meters travelled (usually one hundred thousand meters), and meters travelled in a single run (typically ten thousand meters). One hundred thousand meters is quite an accomplishment on a single level, however, so I found it was usually easier to just play it a few times and eventually push past the ten thousand meter bar.

In addition to unlocking new canyons, there is another game mode for those intrepid enough to break twenty thousand meters in a single run, or hit ten thousand meters in the final canyon: The sandworm. This has been something I’ve mentioned quite a bit, and for good reason! It’s a pretty neat creature. More than simply an obstacle to overcome as a ship, players are able to take up the mantle of the sand-tunneling, shark & ship eating, giant worm and race to munch sharks. The number of sharks required for a healthy worm starts at a neat forty sandsharks in the first canyon and increases to whopping sixty in the final canyon—a goal not easily met, but nonetheless achievable. The usual failure condition of ship destruction does not apply for the worm—there are no other worms, and walls do not inflict damage; instead, they are merely a significant speed bump. Intead, these levels are “failed” by not eating enough sharks before time runs out. That hard two minute time limit, while appreciated for short games, is a bit tedious to work around for unlocking new ships. Worse, the worm plays the same on everything from Silicon, to Obsidian, to Ferridox; the only notable difference are mines introduced in Obsidian which, funnily enough, are edible. 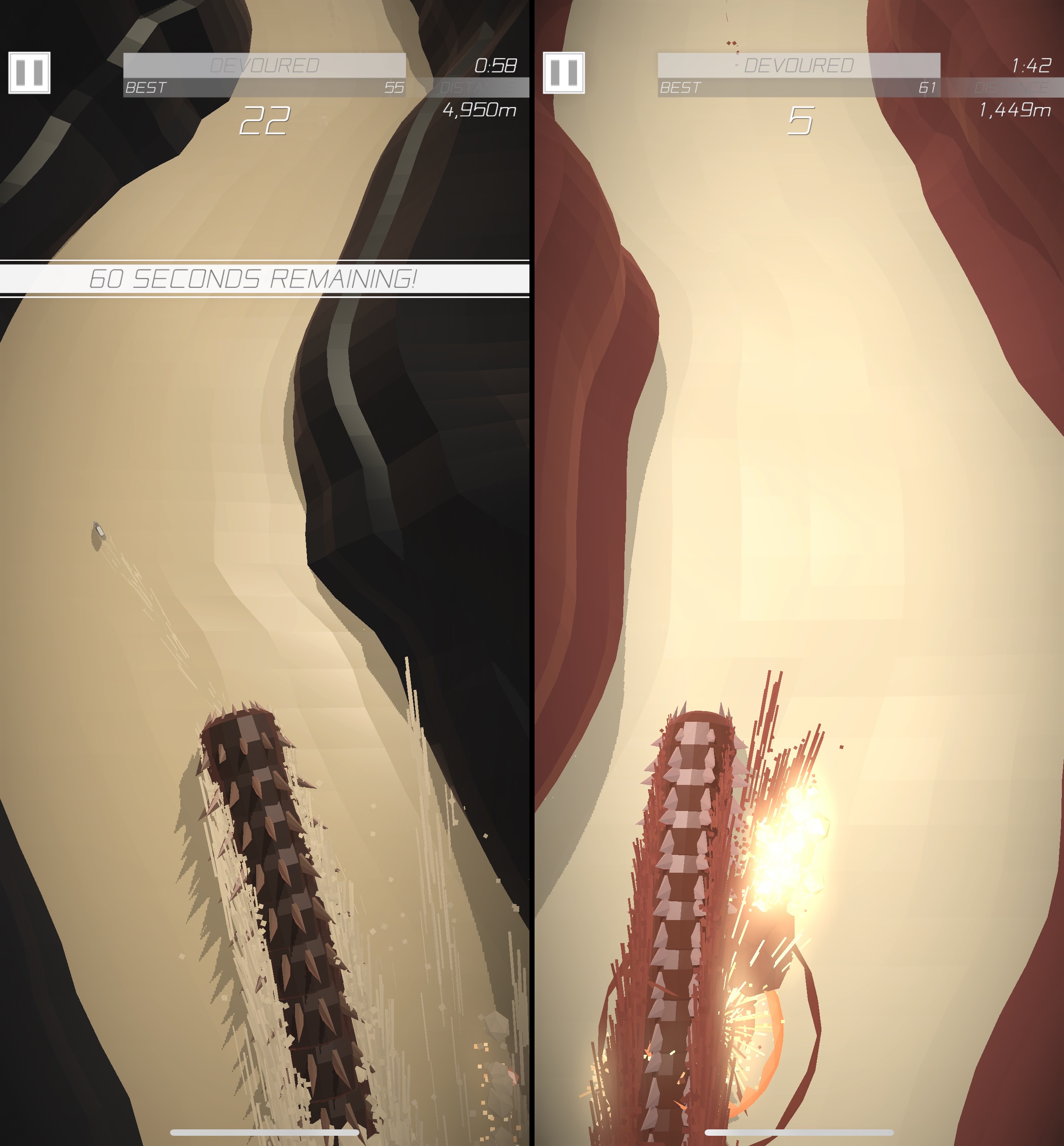 Unfortunately, unlocking new canyons, ships, and the worm for each canyon is the majority of the game’s content. While there are achievements (which are accumulated through normal play), they are the whipped cream on an apple pie—tasty, but not essential. Unlocking the different ships, maps, and worms can be done fairly quickly; after that, there is little to do save push for high scores and hunt achievements. While that can certainly be appealing for some, more “game” would be an improvement. To be sure, I’m not complaining about the gameplay itself! Dodging walls, jumping worms, and catching sharks is a solid game loop, but there needs to be a bit more replayability. While this issue can be somewhat alleviated with more ships, more canyons, or more achievements, none of those are permanent fixes. What is missing, and needed desperately, is a system which encourages replayability.

All things considered, this feels like an excellent starting point for a game that could be really, really cool—given some time to implement additional systems for replayability. On release, as it stands? Great for a few hours of total play, but there just isn’t much here for much more. While I can see this potentially becoming quite a fun endless runner with a dash of Star Wars pod racing, and while I believe it will get there eventually… it isn’t there yet.

Overall, Scorcher is a really good game by Radiangames that’s a single update away from being a great game. Radiangames has a fantastic record of supporting their games on the App Store, which makes Scorcher a easy recommendation even with my complaints.