Amidst many divisive decisions and a number of rocky live events, Pokemon GO (Free) Community Days are probably the closest Niantic has managed to get to that magical feeling of Summer 2016. Despite still being incredibly successful, that surreal global phenomenon of when the game launched is but a distant memory – but Community Days are fantastic way to experience that feeling of, well, community again. This weekend, the February Community Day for Pokemon GO features Swinub, everyone’s favorite Ice/Ground type from the second-generation Gold and Silver games. As usual, there are a number of cool bonuses, exclusive moves and rare Shiny variants to obtain – so you’re completely prepared to Catch ‘Em All, here is a helpful guide to everything you need to know about Pokemon GO’s latest Community Day event. 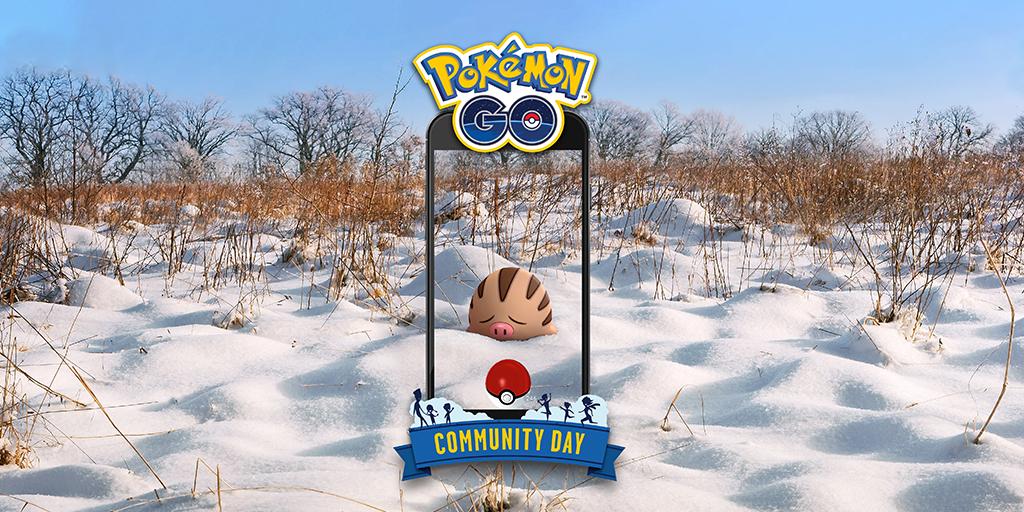 First thing’s first – when is the Community Day taking place in your region? It is the worst feeling in the world to oversleep or just completely miss the very brief period when the Community Day takes place – trust me, I’ve been there far too many times. Set your alarms with the following dates and times in mind:

For the uninitiated, what happens during the event is that Swinub will spawn far more regularly across the entire world for the three-hour duration of the event. This also coincides with the release of Shiny Swinub, which will be far more common to find during the Community Day than during normal captures (the internet suggests around every 25th Swinub will likely be Shiny, but as anyone who has ever hunted for a Shiny Pokemon will know, the real-life number could be a lot more). Alongside the abundance of Swinub, some other neat events will occur, including:

As the name may suggest, Community Days are best played with other Pokemon GO trainers. As the self-proclaimed Wizard of Loneliness, I know this is easier said than done, but I’d recommend taking a look at the Meetup website and checking out your local Pokemon GO group, which will almost certainly be congregating for the Community Day. If all else fails, check out Pokemon GO Discord servers, or even head down to our TouchArcade community and see if there are any locals who you can join forces with.

How to catch, train and evolve a Mamoswine

Long-time Pokemon GO enthusiasts may be wondering ‘why should I do this when I already have a perfectly good Piloswine and a number of Swinub candies’? After all, Swinub was one of the most common creatures during the initial release of Generation 2 Pokemon a couple years ago. The answer, of course, is Mamoswine.

Mamoswine was only released extremely recently as part of the new wave of fourth-generation Pokemon, and is a step above Piloswine in every aspect. As well as being utterly badass (whilst also being completely adorable), Mamoswine has been tipped as one of the best new Pokemon in the meta, with an excellent typing and arguably the best assets of any Ice-type Pokemon we’ve seen yet. However, another evolution requires another 100 candies on top of the 25 required to evolve Swinub to Piloswine, as well as a Sinnoh Stone, which was recently introduced to evolve any older creatures into their powerful Diamond, Pearl and Platinum variants. As a result, catching as many Swinub to stockpile its candy is crucial to achieving the most powerful Mamoswine. This would also be an excellent time to use any Lucky Eggs for maximum event experience, as well as any Incense or Lures to increase the number of Swinub you may see. 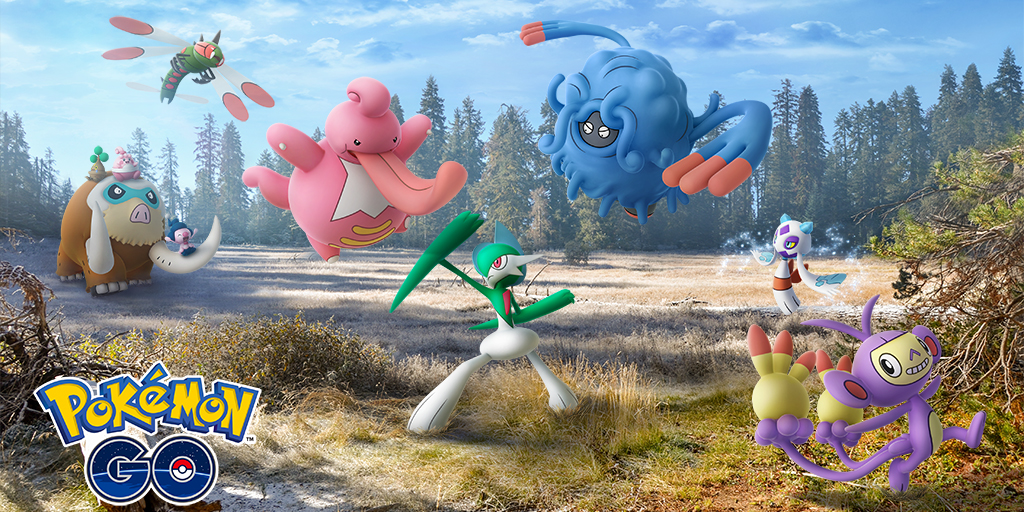 As I briefly mentioned earlier, this Community Day also presents an opportunity to get an exclusive move on any Mamoswines evolved during the Community Day event (there is a one-hour window afterwards too if you were so busy catching, so don’t worry too much). This move is Ancient Power, which may not be meta-defining against the likes of Stone Edge, but is a cool addition to show off to your friends. This move is not obtainable outside of this Community Day, so if you do want it, make sure to evolve your Mamoswine during the event. It may also have some special stat-boosting qualities that are worth considering – but again, more on that later.

Of course, you can only evolve the Pokemon with the new Sinnoh Stone. This evolution item is particularly tricky to find, however Niantic have taken steps to make it easier to obtain during the Community Day. Five Sinnoh Stones are guaranteed by battling other trainers, and five are also confirmed whilst training one of the AI team leaders. Even if you decide to tackle the Community Day solo, you can still get at least five of the stones from these training battles; even if you have no interest in Swinub, I’d highly recommend getting these items, as they are the only way to get cool new creatures such as Electivire, Rhyperior and the incredible Porygon-Z.

If you’re one of the elite, min/max-obsessed trainers like me, or if you’re just interested in getting the best Mamoswine possible for your candy, there are ways to make the most of the three hours of the Community Day. Reddit user LittleSooks of the excellent r/TheSilphRoad has compiled a helpful Swinub Perfect IV CP chart, which tells you the CP of a Swinub at each level that could potentially have the best stats. This also accounts for Weather-boosted spawns – if you really want to optimise your Swinub, try and find a location that is either snowy or clear for the best stats. 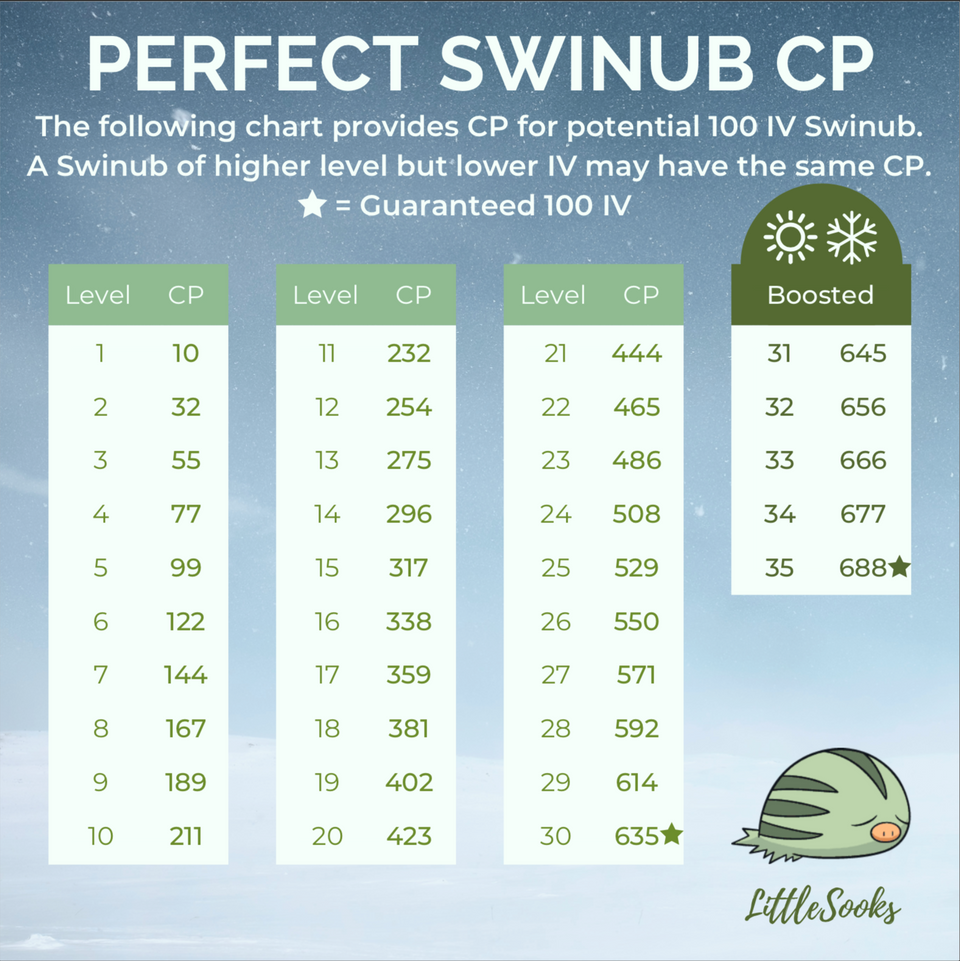 If you want to be ruthlessly efficient, just tap on a Swinub in the overworld, check its CP, and if it matches with the chart below, catch it. If not, move on. Obtaining multiple Shiny Swinub also follows this same method. Check the Swinub, and if it has a green hue and the trademark sparkles, catch it. If not, just run away and continue the search. This is likely the best plan of action towards the end of the event. After catching the Swinub, you can appraise it for insights into its statistics, or use a helpful (and, most importantly, legal) companion app such as Poke Genie to look at its IVs in more detail.

The final thing to note is that a new feature has actually been added to coincide with this Community Day – moves that feature a stat boost. Anyone who has played the main Pokemon series will know that the likes of Ancient Power, Ominous Wind and Silver Wind all have a very small percentage of raising all of your Pokemon’s stats. Up to now, this hasn’t been a feature within Pokemon GO, although Niantic announced yesterday that this new feature is set to Rollout (pun intended) on Saturday. The aforementioned three moves will potentially raise the user’s Attack and Defense, and with Mamoswine being a possible recipient if evolved during the Community Day, there is even more incentive to take part tomorrow. 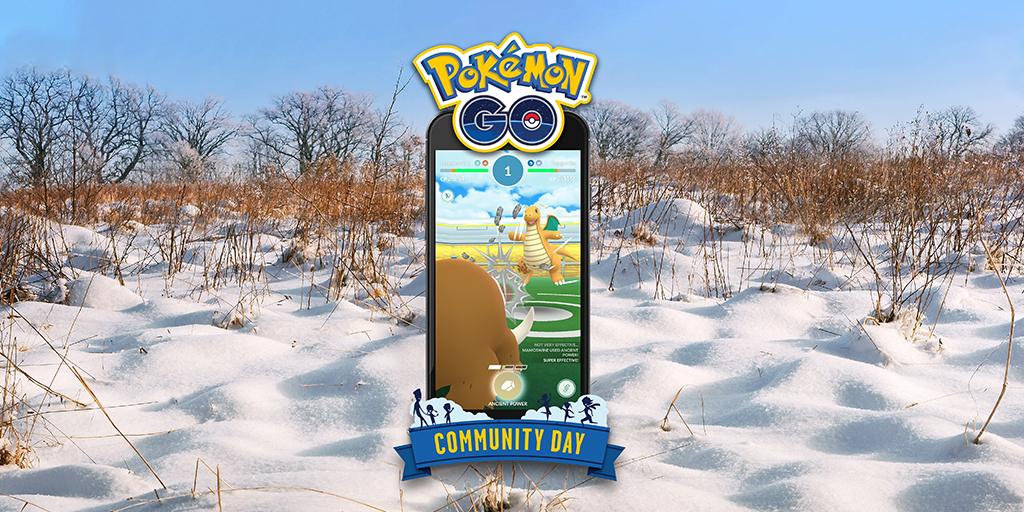 Phew – I think that’s just about everything. If I’ve missed any crucial details, please feel free to share them in the comments so everyone can make the most of this awesome event. Whether you’re just looking to use the fancy new AR camera to take some fantastic pictures of Shiny Swinub, or if you’re looking for the most capable competitive version of Mamoswine, I’d love to hear about your Community Day experiences. Swing down to our Discord server and share your best screenshots with our community, with the best potentially being featured in a future Pokemon GO roundup. Best of luck, trainers!